News
Business
Movies
Sports
Cricket
Get Ahead
Money Tips
Shopping
Sign in  |  Create a Rediffmail account
Rediff.com  » News » Tales from a flooded Chennai: 'Water entered from beneath the doors and suddenly started rising'

Tales from a flooded Chennai: 'Water entered from beneath the doors and suddenly started rising'

Eighteen-year-old Abhik Thapa, a Nepalese student at a private university in Chennai, had come to India as one of the lucky survivors of the killer April earthquake and now he is heading back to Kathmandu after having lived through the Chennai rains tragedy. 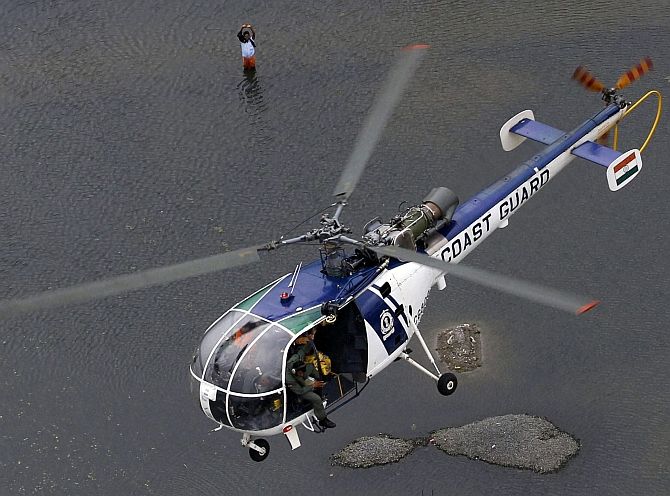 The student of genetics at the SRM University, which bore heavy brunt of the rains during the first few days, was among the several students left stranded in their hostels, after the torrential rains pounded the city last week.

Thapa and his college mates were eventually rescued by a coordinated team of defence personnel and finally brought to the Tambaram Air Base, nearly 30 km from here, before being flown to Delhi.

"My home is in Kathmandu and our family survived that massive calamity, with a little damage to our house. But, yes the disaster and the experiences thereof, of seeing Nepal get back on its feet, helped me cope with with tragedy," Thapa told PTI in Tambaram.

As per the plan, several of the rescued people after being assembled at the Tambaram Base are being taken by Mi-14 choppers in batches to the Arakkonam Naval Base, 70 km west of Chennai, and from there to different cities, mostly in C-17s.

A couple of civilian rescue flights also ferried a few hundred students in the past few days to Delhi, Bengaluru or Hyderabad.

Mumbai-native Sankalp Mohapatra, 21, was stranded for nearly three days at Chennai Airport along with several of his friends from VIT, Vellore. All of them were to catch a flight back to their hometown, little knowing that they had something else in store.

Battling choppy weather, power crisis, inundated streets and the odds, the students, with a few girls among them, survived through the tough times, keeping each other strong.

"Our flight was for December 1, and after announcement of delay it was finally cancelled. We all slept at the airport as we were expecting a replacement flight next day, but it only got worse from there. Next day evening they shut down the electricity connection, as water was coming to the arrival side, and then by late evening it went pitch dark," Sankalp says.

"We then stepped out of the airport and decided to first make way to the Coimbet bus station in Chennai, but seeing the water gushing out, we decide to go back to the airport premises, as we felt it was safer there," the fourth-year student of Computer Science adds.

His friend Pallav Gupta, 21, a Delhi resident, shares another harrowing tale of their ordeal.

"Many taxi and auto drivers tried to take advantage of our situation. They were asking Rs 35,000-Rs 40,000 for taking us to barely a few kms. Even for the nearest metro, they charged about couple of thousands (of rupees). We did not have much money, the ATMs were out of cash, so we could not leave the airport," Gupta rues.

Pallav's friend, Aditi Mehindiratta, 21, a Gurgaon resident, who was with them, says she was worried, but at no point scared.

"After our flights were cancelled, we were given a bus by the airport authorities to Coimbet Bus Terminal, but on way to the place, we saw water gushing out in front of us.

"We then immediately turned around and went back to the airport and stayed put there until help arrived from defence, after one of our friends, whose father is in Air Force contacted him," she says.

SRM University has three campuses and its main centre in Guindy and VIT Vellore's Chennai campus were badly-hit.

"We in our rooms on the ground floor when the water started entering from beneath the doors and suddenly started rising. We immediately ran upstairs on to the higher floors. Our university rescue team helped and fed us initially and then defence people came in and took us to Tambaram Air Base," says Ayush Pandey, a Kanpur native and a 1st year student at the VIT Chennai campus.

19-year-old Akhshay Jyoti, son of a retired commander in Navy, had to contact his father, after being surrounded with water at his campus in Hindustan University.

"We were stuck in our university for a few days after the last heavy rain and later a 'Chetak' came and airlifted five of us students. We were then brought to the Tambaram Base before flying out in a civilian flight from the Arakkonam Base," he says.

Tejas Mohlah, who called help for his VIT friends at the airport, says, "We had also decided to go to the nearest dry place possible or the metro station, which nonetheless was packed like sardines.

"Our friends who were there told us the ticket queues ran for so long, it was taking three hours to get a ticket, and the train were running at long intervals."

Eighteen-year-old twin brothers George and Verghese, who hail from Kerala, flashed a 'V-sign' from the window of the Mi-14, when they were transported to Arakkonam along with other rescued students.

"We were born together, and we survived together," says George. 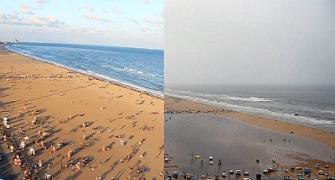 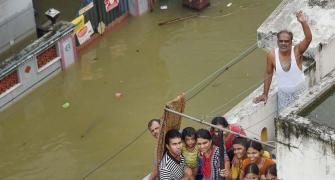 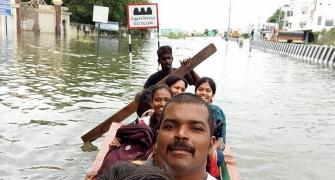 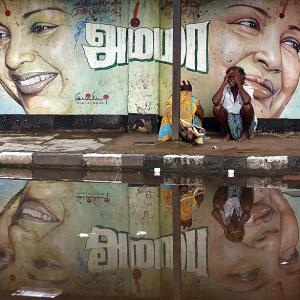 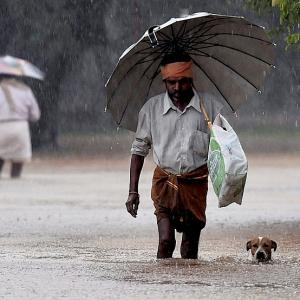