Chardham Yatra -- the pilgrimage to four revered Himalayan shrines in Uttarakhand -- began on Saturday following COVID-19 protocol, after remaining suspended for months due to the second wave of the pandemic. 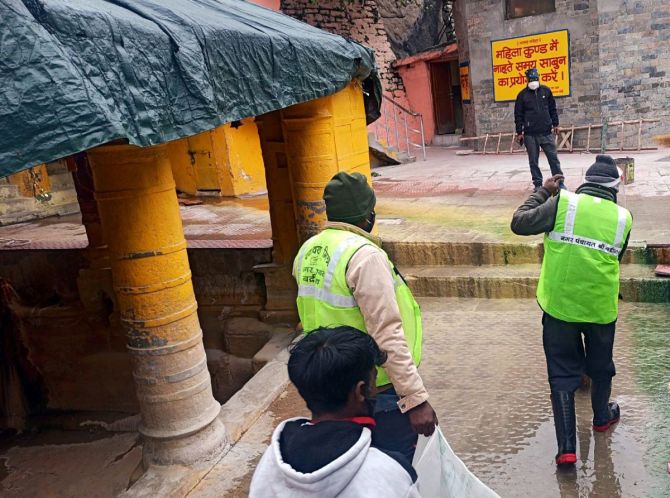 IMAGE: Badrinath Dham premises being cleaned and sanitizes ahead of its reopening for devotees from September 18, in Chamoli on Friday. Photograph: ANI Photo

Devotees began arriving at the temples from nearby villages early on Saturday morning to offer prayers with all arrangements in place to ensure their compliance with the yatra SOP, Devasthanam Board Media in-charge Harish Gaud said.

A tab was kept on visiting pilgrims through CCTV cameras to ensure there was no violation of COVID-19 protocol.

The pilgrims were not allowed to get into the sanctum santorum of the temples -- Badrinath, Kedarnath, Gangotri and Yamunotri.

The delayed yatra will go on till mid-November, Gaud said.

Devotees and traders whose livelihood is connected with Chardham Yatra were excited on the resumption of the pilgrimage.

The state government was under great pressure from them to start the pilgrimage as early as possible.

Though the portals of the temples opened for regular prayers in May itself, they had been kept out of bounds for pilgrims for safety reasons.

However, pilgrimage to the Himalayan shrines began on Saturday after the Uttarakhand High Court vacated its stay on starting the yatra with strict adherence to COVID-19 restrictions.

By 4 pm, 419 people had visited Badrinath and Kedarnath while mostly locals had visited Gangotri and Yamunotri temples, the Devasthanam Board official said.

The Board has issued 19,491 e-passes for Chardham Yatra by Saturday evening, he said.

Meanwhile, the portals of famous Himalayan Sikh shrine of Hemkund Sahib in Chamoli district were also opened on Saturday for devotees.

The Gurdwara Prabandhak Committee has also issued orders to ensure that the COVID-19 protocol is strictly followed by the Sikh devotees.

The yatra SOP issued by the state government on Friday has imposed a daily limit on the number of pilgrims visiting the temples, putting a cap of 1,000 pilgrims daily in Badrinath, 800 in Kedarnath, 600 in Gangotri and 400 in Yamunotri.

Showing a document certifying administration of both doses of COVID-19 vaccine at least 15 days back or a negative RT/PCR/TrueNat/CBNAAT/ RAT test report not older than 72 hours will be compulsory for every pilgrim visiting the shrines, it said.

Pilgrims from within the state will not be required to register on the Smart City portal but it will be compulsory for people coming from outside.

However, pilgrims coming from heavy caseload states such as Kerala, Maharashtra and Andhra Pradesh will be issued e-passes for 'darshan' only after they show a negative COVID-19 test report even if they have received both doses of vaccine.