The Telangana Joint Action Committee which was to complete their protest march at 7 pm on Sunday has decided to stay put on Necklace Road in Hyderabad until there is a decision on separate statehood.

The crowd numbering around 1.5 lakh has decided not budge unless a positive decision on Telangana is announced by the central government.

The JAC, which is leading the protest, says that the police has lobbed tear gas shells at them, used water canons and even lathi charged. "Let them throw bombs on us, but we won't budge from here," a JAC member said.

The police are finding it extremely difficult to control the crowd. They have ordered the blacking out of all regional channels in the Telangana region.

They fear that the movement will get stronger in the districts and people may try to barge into Hyderabad in larger numbers.

However, this did not bar the protestors from carrying out marches and processions in the districts.

Meanwhile, a statement issued by the JAC states that they would not move from Hyderabad. "We had carried out a peaceful protest, but the police used force. Had you let us carry this protest without any interference, we would have lived up to our promise and moved out of here," the statement read.

In the meanwhile, the ruling Congress, both at the state and the Centre, is in a dilemma over the situation. They have to curb the protest ahead of the UN bio diversity meet on Monday where 192 countries are taking part.

Andhra Pradesh Chief Minister Kiran Kumar Reddy is in talks with New Delhi and some announcement is likely by tonight.

Earlier, violence erupted along the Neckalce Road in Hyderabad -- the site of Telangana march -- as the protestors went on rampage. They attacked the vehicles of the police and the media and set fire to at least three vehicles.

The vehicles set on fire include those of Sakshi TV, Doordarshan and a police van. The protestors were infuriated over the lathicharge of police against the people coming for participating in the Telangana march.

TJAC convenor Prof Kodanda Ram told the march participants that they should not move from the place till central government makes an announcement on Telangana state.

Chaos was prevailing on Hyderabad roads as the police and para-military forces closed down several routes to stop the pro-Telangana protestors from occupying the area around the Hussain Sagar lake for a massive march.

Barricades and barbed wire were laid on all the roads leading towards the area, where the Andhra Pradesh secretariat and other government offices are located.

The state government permitted the Telangana march called "Sagara Haaram" only at Necklace Road and the police allowed the protestors to enter the road from the Secunderabad side.

The closure of all other roads and refusal to various organisations to take out smaller processions towards the venue of the march created a lot of anger among the people leading to clashes.

The protestors clashed with the police near Telugu Talli statue before Tank Bund and also in front of the Prasad I-Max theater as they were stopped by the police from moving forward. The police used tear gas shells after the protestors pelted stones.

Lakhs of people, coming from all over Telangana region, were pouring on to the Necklace Road. They were carrying banners and flags and shouting slogans in support of a separate state.

The Telangana Joint Action Committee, the main organiser of the program, alleged that after granting permission to the march, the government and the police were now trying to sabotage it by triggering violence.

They said that more than 15 trains have bee cancelled and hundreds of buses and other vehicles were stopped to prevent the people from reaching Hyderabad.

"The police is continuously arresting the people", said Prof Kodanda Ram, the convenor of TJAC.

The Telangana Rashtra Samiti, Bharatiya Janata Party, Communist Party of India and CPI-Marxist Leninist New Democracy have taken out processions with thousands of people from different places to reach the venue of the march.

However, the Osmania University students were stopped by the police and the security forces from taking out a procession from the campus leading to a violent clash between them.

The police lobbed tear gas shells and made lathi charge to disperse the violent groups of students who were pelting stones.

Meanwhile, the police detained the Congress members of Parliament from Telangana after they tried to sit on a dharna  outside the residence of Chief Minister N Kiran Kumar Reddy in protest against the arrests of the people in Telangana.

After they were released, they again went back and started protesting there.

Meanwhile, banners and posters have come at the venue of the march threatening that the protest will not end till the central government makes an announcement on the Telangana state. 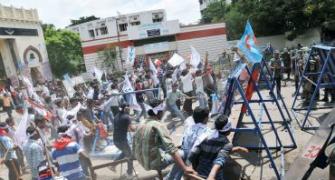 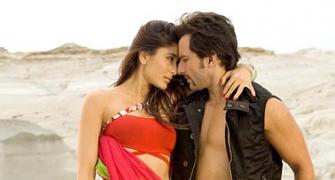 'Telangana march nothing but a game of T20 cricket'