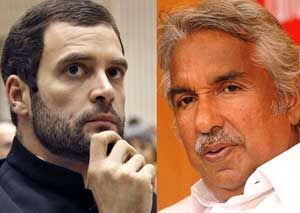 Kerala Chief Minister Oommen Chandy, who has been under attack from the Communist Party of India – Marxist over the solar panel scam, on Friday met Congress Vice President Rahul Gandhi and discussed the political developments in the state.

"When I met Congress leaders, definitely all the issues, the general political situation of Kerala is discussed, naturally this issue was also discussed," Chandy said when asked whether Gandhi sought details from him about the scam that has rocked the party and the state government.

The senior Congress leader, who is in Delhi to attend a ceremony of the United Nations, also held discussions with Union ministers A K Antony and Vayalar Ravi and Congress President Sonia Gandhi's political secretary Ahmed Patel.

Chandy said a high-level police team is investigating the case and his government has nothing to hide.

Alleging political conspiracy by the CPI-M-led opposition, the chief minister said that his government was open to any kind of investigation once the ongoing police probe gets over.

"Before completing the police investigation, if a judicial enquiry is ordered, then the culprits will get a chance to escape," he said.

Dismissing suggestions that there was unease within the party over the issue, Chandy said the Pradesh Congress Committee headed by Ramesh Chennithala and the party-led United Democratic Front are united on this issue.

"My government is stable," said the chief minister.

The scam pertains to alleged cheating of several people by one Saritha Nair and her accomplice Biju Radhakrishnan. Shalu Menon, an actress, has also been arrested in connection with the case.

The case took a serious political turn with the arrest of one of Chandy's close personal aides, who allegedly has links with the accused. Two other employees in his personal staff have also been removed in connection with the scam.

Asked about a possible Cabinet reshuffle and inducting Chennithala in it, the chief minister said, "I am the happiest man for that."

Chandy refused to say whether he was ready to give Chennithala the home portfolio.