Chandrayaan-2: We shall overcome some day, says Prez 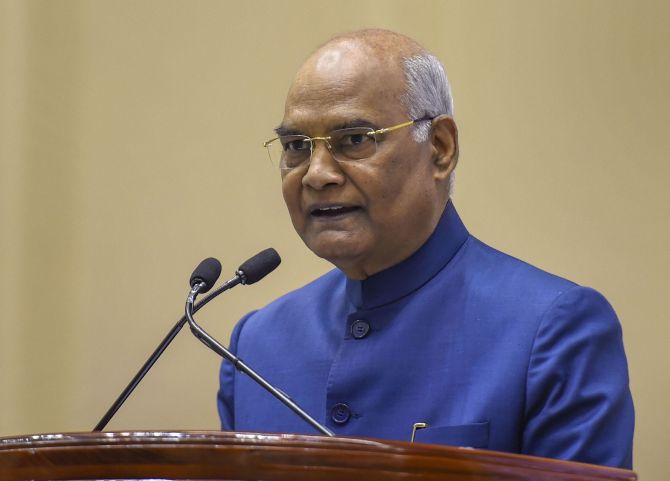 Addressing a youth summit organised by a charitable organisation in New Delhi, Kovind said like Swami Vivekananda is a timeless rode model for youths, Indian Space Research Organisation Chairman K Sivan and his team will be India's role model in the field of space in the times to come

"I remember Chandrayaan-2's launch was earlier scheduled on July 15. I was there in Sriharikota. I saw the massive carrier, 'Bahubali', from close proximity.

"Thereafter, I proceeded to the assembly point," he said.

"What I liked the most was that there were as many women in the engineering team as men," the President said.

Lauding the scientists for their commitment to their work, he recalled a woman scientist telling him she had left her six-month-old baby with her parents at Bengaluru.

The launch in July was deferred after a technical snag developed in the launch vehicle system about one hour before blast-off.

"It was coincidence and not misfortune," the President said at the event organised Pawan Chintan Dhara Ashram.

Kovind said that the Chandrayaan-2 spacecraft was launched on July 22 and it was a complete success for around 50 days.

"We covered 3.84 lakh-km journey successfully, only 2.1 km were left. The distance left is negligible on such a huge scale. It's such a huge achievement," he said.

The president said the youth of today's India is full of energy and 80 crore youths with their creative prowess can take the country to new heights of achievement.

He cited the examples of sprinter Hima Das who clinched five gold medals in Europe in July, shuttler P V Sindhu who became the first Indian to win gold in BWF World Badminton Championships in August, and Manasi Joshi, who created history by securing gold at the BWF Para-Badminton World Championships.

"I have mentioned a few people here. Many such talented persons are coming to the fore and more such efforts needed," he said.