Unsuccessful soft-landing nothing to be alarmed about: Former ISRO chairman

Veteran space scientist G Madhavan Nair said on Tuesday that Indian Space Research Organisation's unsuccessful bid to soft land on the moon is nothing to be alarmed about, and it would only enable the space agency master complex missions going forward. 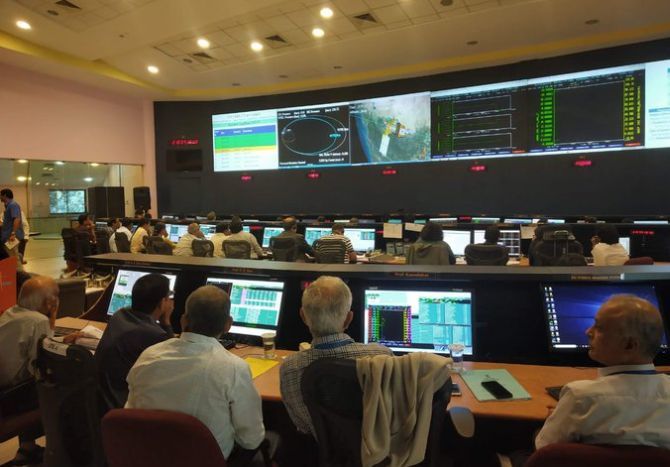 The former Chairman of ISRO also acknowledged for the first time that there is now no hope to re-establish contact with Chandrayaan-2's lander 'Vikram'.

Nair slammed ISRO critics who questioned its Chairman K Sivan's statement that 98 per cent of Chandrayaan-2's mission objectives had been achieved, despite an unsuccessful bid to soft land on the moon.

ISRO is the top-most performer in the country in terms of science and technology and it has been undoubtedly proven by the results over several years, Nair said.

"There is a system in place for review and decision making. It's not a single man show.

"It's a big family, proper mechanism at every level to review the process, design and testing..." Nair said in support of Sivan, who has come under criticism in some quarters after the moon mission did not go as per plan.

He said ISRO has made a large number of attempts and used different methodologies to restore the link with the lander, but so far couldn't succeed.

"That way we can say that they have not been able to make use of that part (lander-rover) of the mission", Nair said.

Chandrayaan-2's lander with rover 'Pragyan' tucked inside it, lost communication with ground stations 2.1 kms above the lunar surface, minutes before the planned touch-down early on September 7.

Since then, ISRO had been making all possible efforts to restablish the link.

The mission life of the lander, which had a hard-landing, was one lunar day, equivalent to 14 earth days, which ended last Saturday.

Asked if there was now "zero-possibility" of the lander springing back to life, Nair said: "I think so, I don't think we will be able to get anything out of that".

But he hastened to add that the Chandrayaan-2 mission is a grand success because most of the mission objectives have been achieved successfully except the soft landing.

He noted that the lander was brought down very gradually from 100 km altitude when it was travelling with a velocity of 1.6 km per second, using navigation guidance systems, among others, to a height of two kilometres, and the location of the hardlanding was also within 500 metres of designated touchdown target.

Soft-landing is a "very, very complex type of manoeuvre", according to him.

ISRO had developed thrusters for the mission and they have functioned very well, he said.

On the planned soft-landing not going according to ISRO's script, Nair, who spearheaded the Chandrayaan-1 as ISRO Chairman more than a decade ago, said it could be due to a combination of factors.

"Some sensors would have misbehaved or some error in software. We should not be alarmed about it or a make hue and cry about it. This is something which does happen", he said.

Nair recalled that during his stint at ISRO, the first PSLV flight mission was a failure.

"Every hardware worked all right, but because of a small error in software implementation, we lost the (then PSLV) mission", he said, adding, a host of corrective measures were taken thereafter, resulting in 95 per cent success rate of PSLV today.

"Certainly when you are dealing with a very complex system, failures are not uncommon. But we have to learn from those failures and correct for the future", Nair said.

"I will totally agree with Dr Sivan on 98 per cent success rate of Chandrayaan-2 mission", he said.

Nair noted that Chandrayaan-2's orbiter is doing fine, all the instruments are working and it's life could be much longer than ISRO had originally expected.

"So, the scientific community is going to get tremendous amount of data, and if they make use of it, there could be several new findings", he said, pointing out that the instruments on board the orbiter are very refined.

"They (the instruments) are looking at it (lunar surface) from 100 km... resolution is better, perhaps we are going to have the highest resolution picture of the moon compared to any other nation at the end of the mapping", Nair said.