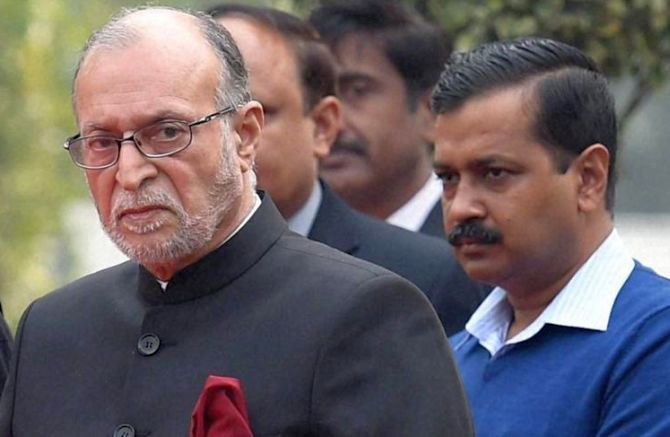 For the Delhi unit of the Bharatiya Janata Party , the fat is in the fire.

Madan Lal Khurana, who struggled his entire life to achieve statehood for Delhi, must be turning in his grave to see his own party colleagues at the Centre leading the move to dilute powers of the Delhi government. “We are the ones who gave statehood to Delhi. And every move has a time and a place,” says Sudhanshu Mittal, party leader from the state.

But it is hard to deny the National Capital Territory of Delhi (Amendment) Bill -- which was passed by Parliament -- is going to be a political millstone around the Bharatiya Janata Party’s neck for the extent to which it dilutes the Indian capital’s autonomy and emasculates the elected local government’s powers.

The saving grace is that elections to the Delhi assembly -- last held in 2020 -- are still a long-distance away. But, internally, the BJP is preparing with some trepidation, for the local body polls that are due in 2022.

If by-elections to the municipal corporation of Delhi are anything to go by, the Aam Aadmi Party, currently in power in Delhi, has neither lost sway nor elan. In March, the AAP won four of the five by-elections. One of the candidates, who was in the Bahujan Samaj Party but resigned to join the AAP, re-contested and won the same seat (Rohini-C). The party retained two seats: Kalyanpuri and Trilokpuri. The seat it really won after a struggle was Shalimar Bagh (North), from the BJP. Shalimar Bagh (North) is reserved for women.

Delhi BJP president Adesh Gupta said: “Losing Shalimar Bagh (North) is a matter of introspection. The shortcomings will be removed and I am sure the BJP will win the elections to the three municipal corporations in 2022.”

But this isn’t going to be easy. Not after the National Capital Territory of Delhi (Amendment) Bill.

The state government and the lieutenant governor

The Government of National Territory of Delhi Act, 1991, is the law that currently defines the relationship between the Centre and the Delhi government. Section 44 deals with the conduct of business. The Centre says there is no structural mechanism within the act to ensure time-bound implementation of the rules under the section. Also, the law is not clear about what proposals or matters need to be taken up with the LG before the state government issues orders.

And then, there’s the order of the Supreme Court in the Government of NCT of Delhi v/s Union of India case where the Supreme Court held that the LG was bound by the aid and advice of the Council of Ministers and was in no position to act independently, thus ruling in the favour of the then government of the Aam Aadmi Party.

Added to the mix is Clause (4) of Article 239AA of the Constitution which deals with special provisions with respect to Delhi. The clause says in case of a difference of opinion between the LG and the Delhi government, the LG can refer it to the President and the decision of the President in that aspect will be binding.

The law Parliament has cleared redefines ‘Government’ as LG for Delhi. This definition will apply to any law made by the legislature in Delhi.

Two, through Section 3 of the amended law anything that was left outside the scope of the LG’s powers, will now be added to them. Any matters that fall outside the purview of the powers conferred on the legislative assembly now vest with the LG.

The new bill also makes an amendment to Section 33 of the 1991 Act which dealt with the rules of procedure. The effect of the amendment is that the legislative assembly will no longer be able to make any rule to enable itself or its committees to consider matters of the day-to-day administration of Delhi or conduct inquiries in relation to the administration of Delhi. What is more, the provisions are retrospective, rendering all existing committees, null and void.

What the changes mean

Bizarrely, internally, the BJP claims it got the idea for the amendment from Pakistan, when the Nawaz Sharif government was in power and a coalition of forces, including Imran Khan’s Pakistan Tehreek-e-Insaf, occupied a part of the capital, Islamabad.

“We thought, what if the same thing happens here?” said a BJP leader. “What if Arvind Kejriwal and his anarchist colleagues use their anarchic politics to destabilise India through its capital?”

The BJP reminds those who are listening that in many countries of the world, the capital city is governed via the federal government. “There were ambiguities in Delhi’s governance status. We’re tried to remove the ambiguities” is the party’s official stance.

Obviously, the AAP is not going to let things lie. But armed with new powers, the LG is not going to relent either. A battle royale in Delhi is inevitable, sooner than later.