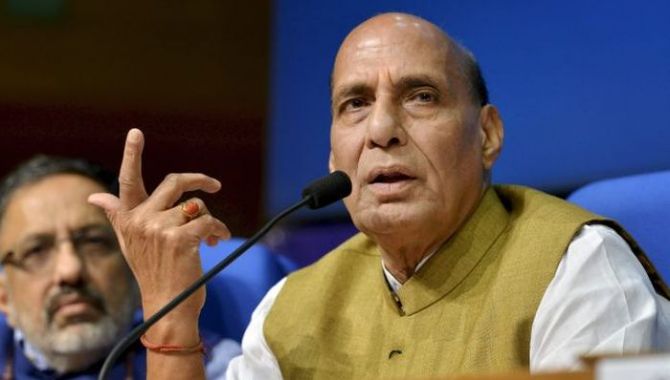 The Centre on Monday appointed former Intelligence Bureau chief Dineshwar Sharma as its special representative for a ‘sustained dialogue’ with all stakeholders in Jammu and Kashmir, in a fresh move aimed at bringing peace to the troubled state.

Sharma, with the rank of cabinet secretary, will have complete independence in deciding who to hold talks with, Union Home Minister Rajnath Singh said while making the crucial announcement at a hurriedly-called press conference in New Delhi.

Singh stated this when asked whether Sharma would hold talks with the separatist Hurriyat Conference.

Sharma, a 1979-batch IPS officer who served in the state in 1990s and retired last year, would initiate sustained interactions and dialogue to understand the legitimate aspirations of people, especially the youth, and try to fulfil them, Singh said.

He will hold talks with all sections of people and organisations, the minister said and made it clear that there is no time-frame for him as the issue is sensitive.

Jammu and Kashmir Chief Minister Mehbooba Mufti welcomed the announcement while the Opposition parties like National Conference and Congress took a dig at the government, saying it had realised that ‘force’ and ‘muscular’ approach alone would not solve the problem.

Singh said Prime Minister Narendra Modi had held a series of meetings with political representatives on the Kashmir issue and ‘all of them were clear that the process of dialogue should begin in the Valley’.

The home minister referred to the prime minister's last Independence Day address in which he had said that problems of J&K cannot be solved by bullets or abuses but by embracing the people of the state.

That statement clearly underlined the government's policy and intention, Singh said while adding that the government was sensitive to issues related to Jammu and Kashmir.

"The Centre has shown conviction and consistency on Kashmir issue and carrying forward this policy, we have decided to begin a sustained dialogue policy for Jammu and Kashmir.

"And for this, we have decided to appoint Dineshwar Sharma as special representative of the Government of India," he said.

Sharma is the fourth interlocutor appointed by the Centre since 2002. The first one was former Union minister K C Pant, the second N N Vohra, the present governor of the state, and the last was a three-member panel comprising former bureaucrat M M Ansari, academician Radha Kumar and late journalist Dileep Padgaonkar.

Asked about the failure of similar initiatives undertaken earlier, the home minister said, "Please take it from me that whatever we do, we will do with good intentions and clear policy."

To another question regarding previous reports of interlocutors gathering dust in the home ministry, he said, "You cannot pre-judge that this initiative will not be successful. Our announcement shows how serious we are about initiating dialogue."

Asked whether a police officer was capable for holding talks on such a sensitive issue, Singh shot back, "What's wrong in that? He is an apolitical person having no political affiliation, which is his greatest advantage. Besides, he is well aware about the internal security situation of the country."

Mehbooba welcomed the announcement, saying dialogue is the need of the hour and the only way forward.

‘Welcome the initiative of Union Government, appointing an interlocutor for leading a sustained dialogue with stakeholders in Jammu & Kashmir (sic),’ Mehbooba said in a tweet.

National Conference leader and former chief minister Omar Abdullah said the ‘acceptance’ of the political nature of the Kashmir issue was a ‘resounding defeat of those who could only see use of force’ as a solution.

‘Centre announces an interlocutor to engage with stake holders in J&K. Will keep an open mind and wait to see results of the dialogue process,’ he tweeted.

He also sought to know the fate of the ongoing probe into terror-funding cases against some separatist leaders.

He asked, "What does this mean for the NIA investigation in J&K? Will investigation be suspended to facilitate dialogue with detained Hurriyat leaders?”

Responding to a tweet about the choice of a non-political representative, Omar said, “One can't get everything. So for now, we'll take what we can get. More important than the person is the mandate and absence of pre-conditions.”

Senior Congress leader and former Home Minister P Chidambaram said the movement from ‘No talks’ to ‘Talks with all stakeholders’ was a major victory for those who had argued for a political solution in Jammu and Kashmir.

"With appointment of interlocutor, I hope government has finally admitted 'muscular approach' has failed in J&K," he added.