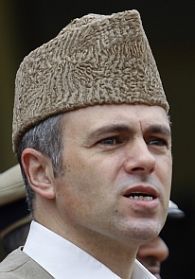 Breaking his silence on former army chief V K Singh's remarks that ministers in Jammu and Kashmir were given money by the Army, Chief Minister Omar Abdullah on Wednesday said the Centre should conduct a thorough probe as allegations made by Singh cannot be brushed aside.

"Majority of mainstream politicians have no financial dealing with the Army. Therefore, this accusation of his (Gen Singh) that all minister since 1947 have taken money from the army, I think it is important that the government of India conducts a threadbare inquiry and the findings, whatever they may be, should be shared with us," he told reporters.

"I think the government of India needs to come clean on this. Otherwise, all mainstream political parties are today being looked at with suspicion," Omar said.

This is the first reaction of the chief minister since the controversy broke out on Friday following a media report which claimed that Technical Service Division, an intelligence unit set up V K Singh, had allegedly paid Rs 1.19 crore to state Agriculture Minister Ghulam Hassan Mir to topple the state government in 2010.

Omar said the claim made by the former army chief cannot be "dismissed out of hand" and "they require further investigation". "The matter is being taken up with the government of India formally for further action. I don't think beyond that it would be appropriate for me to say anything other than the fact that this effort that is being made to vilify all mainstream political parties is extremely unfortunate," he said.

Mir, an independent member of Legislative Assembly from Tangmarg, has said, "I have nothing to do with it. It is a blatant lie." Facing fire over his remarks that ministers in Jammu and Kashmir were given money by the Army, V K Singh had on Tuesday sought to do damage control by saying it was not a bribe.

"It was meant solely for stability...to win hearts and minds of people, to wean people away from separatist activities under the overall umbrella of sadbhavna (harmony)," he had said. Omar said the sort of statements and accusations made by Gen Singh only cause "us great deal of difficulty here".

"(With) only one statement of his, the general has done nothing but create untold problems for mainstream political parties, particularly those operating in KashmirValley," the chief minister said.

To a question, he said, "Mir is a minister from our ally Congress party. I have taken up the matter with the Congress leadership. Now leave it to us (about) what we have to do further."

Union Home Minister Sushilkumar Shinde said on Tuesday that the government was ready to probe the allegations if the beneficiaries were identified.