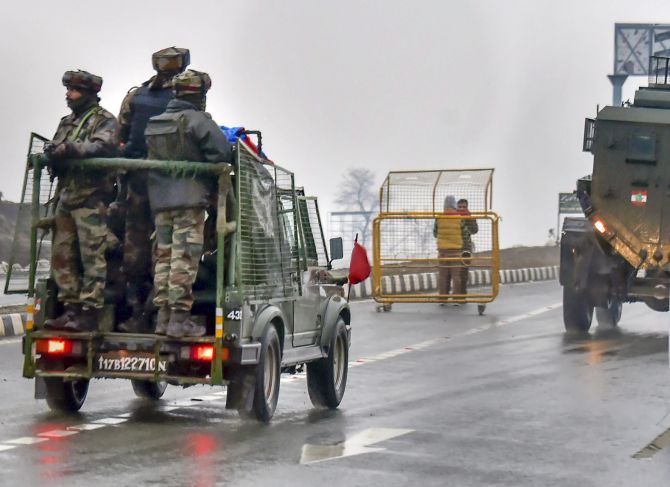 The Centre has ordered rushing of about 10,000 central forces personnel to the Kashmir valley in order to strengthen counter-insurgency operations and law and order duties there, officials said on Saturday.

They said the Union home ministry has ordered the deployment of 100 companies of the Central Armed Police Forces (CAPFs) on July 25 on an 'immediate' basis.

Officials said that 100 more companies are expected to be sent to the valley.

One CAPF company comprises about 100 personnel.

The latest units will be drawn from the Central Reserve Police Force (50 companies), Sashatra Seema Bal (30) and Indo-Tibetan Border Police and Border Security Force will contribute 10 each, they said.

The ministry has said that these personnel will be deployed to strengthen the counter-insurgency grid and law and order duties in the Kashmir Valley, they said.

They are being air lifted and sent by trains, officials said.

It is understood that the new units will reinforce the strength of the security forces already present in the valley who are conducting the annual Amarnath Yatra and carrying out counter-terrorism operations daily, they added.

The troops will be addition to about 65 regular battalions of the Central Reserve Police Force in the valley and over 20 other battalions of other forces deployed to conduct the yatra that will end on August 15.

One CAPF battalion has about 1,000 personnel.

The new strength of the troops will also help in the conduct of the assembly polls in the state that are expected to be held in some time, they said.

Former chief minister Mehbooba Mufti criticised the Centre's decision saying Jammu and Kashmir is a 'political problem' which would not be solved by military means.

Mehbooba, the president of People's Democratic Party, also said the Centre needs to 'rethink and overhaul its Kashmir policy'.

'Centre's decision to deploy additional 10,000 troops to the valley has created fear psychosis amongst people. There is no dearth of security forces in Kashmir. J&K is a political problem which won't be solved by military means. GOI needs to rethink & overhaul its policy,' Mehbooba wrote on Twitter.