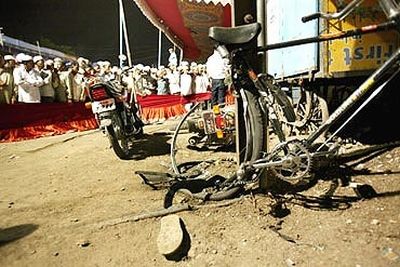 The Centre has rejected the Maharashtra government's proposal to ban right wing group Abhinav Bharat, which is accused of carrying out the bomb attack at Malegaon in 2008.

The decision has been taken by the home ministry after it came to the conclusion that the group has not been involved in any terrorist or anti-national activity in recent years, official sources said.

Before rejecting the Maharashtra government's proposal, the home ministry sought the views of central intelligence agencies and the National Investigation Agency, which has been probing most of the terror cases since 2009.

Abhinav Bharat, a group of right-wing Hindu activists, was allegedly set up to counter jehadi terror attacks. It was set up in 2006 and mainly operates in Maharashtra and Madhya Pradesh.

The Maharashtra government's proposal came after the state anti-terrorism squad recommended a ban, claiming that Abhinav Bharat members were allegedly involved in the 2008 Malegaon blast.

The state government had also informed the Bombay high court in October 2012 about its intention to ban the group.

Abhinav Bharat has been at the centre of a war of words between the Bharatiya Janata Party and the Sangh Parivar on the one hand and their detractors on the other.

Opponents of the BJP have cited the presence of alleged members of Rashtriya Swayamsevak Sangh in the ranks of the group and their alleged involvement in acts of terrorism to dub the Sangh Parivar as equivalent to jihadi outfits.

The Bharatiya Janata Party and Sangh Parivar have strongly refuted the charge.