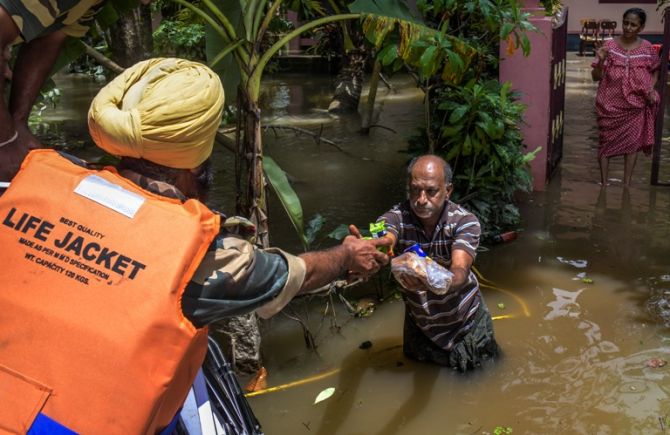 IMAGE: A BSF personnel distributes food food and water to the residents who are stuck in their houses as well who have not vacated houses because of the flood water in interior places at Allapy. Photograph: Atul Loke/Getty Images

The Union government is likely to take a stand of ‘politely’ refusing any ‘help’ from foreign governments as relief to the flood-affected state of Kerala.

This comes on the back of the United Arab Emirates government offering Rs 7 billion to the Kerala flood relief fund. “The central government is of the stand that Kerala can take help from individuals abroad. But if any government is ready to help, we should not take it,” said a senior official from the finance ministry of Kerala.

He added that even though the UAE government has offered the aid, the Government of India has not given a positive response. According to a document circulated among state officials spearheading the relief operations, early indications point toward requirements that are within the capacity of the people and the Government of India to meet.

“In view of the above, you may politely convey to your interlocutors that in the present circumstances, the Government of India has taken a considered decision to rely solely on domestic efforts to tide over the challenge,” it said. Confirming this, the state government official said they have been asked to express appreciation for the willingness to assist.

“We are specifically told that if any offer comes directly, we should get clearance from the Centre,” he added.

Interestingly, Finance Minister Piyush Goyal had said on Tuesday that the central government is exempting basic Customs duty and the integrated goods and services tax for goods imported or supplied for flood relief operations in Kerala.

The Centre had allotted Rs 5 billion as interim relief last week after the visit of Prime Minister Narendra Modi to the flood-hit districts even though the state had asked for Rs 20 billion.

“His concern reflects the special ties between governments and people of India and UAE,” Modi had said in a Twitter message. According to estimates by the state government, its losses will come to the tune of around Rs 200-250 billion. Modi’s aid was in addition to the Rs1 billion declared by Home Minister Rajnath Singh during his visit early this month.

Chief Minister Pinarayi Vijayan has indicated the state may require an amount equalling its Budget size.

Meanwhile, Communist Party of India-Marxist General Secretary Sitaram Yechury on Tuesday urged Modi to increase the central assistance for Kerala to Rs 20 billion and to seek assistance from the United Nations and the World Health Organization.

He added the aid given so far is grossly inadequate, considering the extensive damage. More than 350 people lost their lives in the Kerala floods, as of August 20.

The railways ministry has asked all its employees to offer one-day’s salary for relief operations, which will come to around Rs 2-2.5 billion. Food Minister Ram Vilas Paswan said on Tuesday that 89,540 tonne of foodgrain and 100 tonne of pulses will be supplied for free to the flood-hit state. This will be in addition to the monthly allocation of 118,000 tonnes of foodgrain to the state.