The Centre has told the Delhi high court that the PIL seeking stay on the construction of Central Vista here amid the raging COVID-19 pandemic was just another attempt to stall the project which has been facing such attempts from the beginning on one pretext or another. 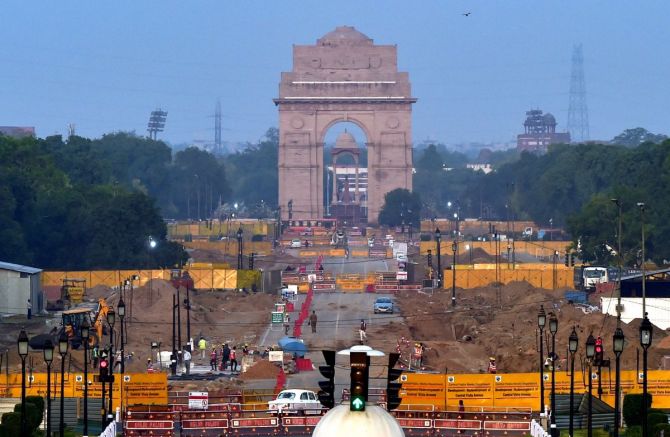 The "intentions and motive" behind filing of the plea are evident from the fact that the instant project has been singled out by the petitioners despite several other agencies, including Delhi Metro, carrying out construction activities across the national capital, the Centre has alleged.

"The very fact that out of all these construction activities going on simultaneously for different projects by different agencies, the petitioner has chosen to be a public spirited citizen only with regard to one project only speaks volumes about his intentions and motive behind filing the present petition," the Centre's affidavit has contended.

Since the affidavit was not yet on record, a bench of Chief Justice D N Patel and Justice Jasmeet Singh listed the matter for hearing on May 12.

The court also allowed the early hearing application moved by the petitioners -- Anya Malhotra, who works as a translator, and Sohail Hashmi, a historian and documentary filmmaker -- who have contended that the project was not an essential activity and therefore, it can be put on hold for now during the pandemic.

In the affidavit filed in the court on May 10, the central government has said that the Delhi Disaster Management Authority has permitted construction activities, during the prevailing curfew, where the labourers are residing on-site.

It has said the workers were engaged well before the imposition of curfew on April 19.

"It is submitted that in the meantime, a COVID compliant facility was installed at the worksite itself, to accommodate the 250 workers who had expressed their willingness to stay put and continue the aforesaid work.

"The facility provides for strict implementation of COVID protocol strictly and also adherence to COVID appropriate behaviour, such as sanitization, thermal screening, physical/social distancing and masking," the government has said in its affidavit.

It has also said that the contractor has provided health insurance to all the concerned workers against COVID-19 and a separate facility for conducting the RT-PCR test, isolation and medical aid has also been set up at the site.

"It is unequivocally stated that the workers working on the project as of now, are residing at the work site, following social distancing norms as well as other COVID-19 protocols.

"It is false to suggest that any workers are brought from Sarai Kale Khan camp to the working site on a daily basis or otherwise and consequently, the entire substratum of the case of the petitioners is erroneous and based on falsehood," the government has said.

The high court on May 4 had adjourned the matter to May 17 saying it first wants to study the apex court's January 5 judgement giving a go ahead to the Central Vista project.

Thereafter, the petitioners had moved the apex court against the high court's May 4 order,

In the hearing before the apex court, they had said that the plea was only opposed to the permission granted for continuing the construction going on at Rajpath, Central Vista stretch and gardens.

"Labours are being transported from Sarai Kale Khan and Karol Bagh area to Rajpath and Central Vista, where construction work is going on. This enhances chances of spread of COVID infection among them," they had told the apex court.

The apex court had declined to interfere in the matter as the issue was pending before the high court.

It asked the petitioners to seek an early hearing before the high court and subsequently, they moved an application to advance the matter.

The petitioners have claimed before the high court that the project has the potential to be a super spreader if allowed to continue during the pandemic.

Their plea has also contended that the continuation of the project was a matter of concern in view of the "crumbling" healthcare system and the lives at stake of the workers employed at the construction site.

The project entails construction activity on Rajpath and the surrounding lawns from India Gate to Rashtrapati Bhawan, said the plea, filed through advocates Gautam Khazanchi and Pradyuman Kaistha.

The project envisages constructing a new Parliament House, a new residential complex that will house the Prime Minister and the Vice-President, as well as several new office buildings and a Central Secretariat to accommodate ministry offices.