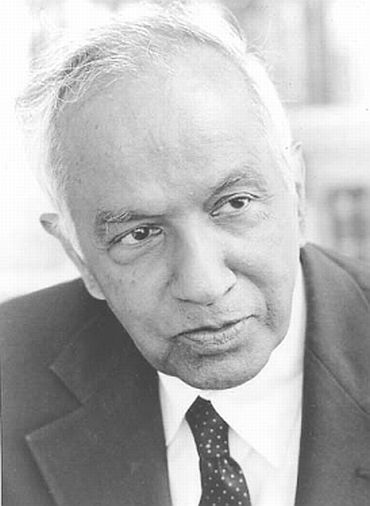 Both the central government and the Tamil Nadu government have chosen to ignore the birth centenary of Nobel laureate Subrahmanyan Chandrasekhar, one of the brightest sons of India hailing from Tamil Nadu, which falls on Tuesday.

Barring a stray symposia here or there, hardly anything is being done in Chandra's honour.

However, the Centre for Advancement of Public Understanding of Science & Technology is holding a series of events from October 19.

CAPUST is a non-profit trust which aims to promote public understanding of science and technology.

CAPUST will spearhead an initiative called Project Chandra to acquaint school and college students with the legendary astrophysicist's work.

The trust will hold an international exhibition of photographs, books, documents across India. CAPUST is also trying to set up a Chandra Centre for Science and the Arts on a public-private partnership model which will undertake special programmes for the training of science journalists.

Chandrasekhar, a student of Presidency College in Chennai and Cambridge University, migrated to the United States in 1937.

He maintained close ties with India throughout his life and considered coming back to his motherland on multiple occasions.

On returning to India, Chandra did try seriously to look for a position of a readership in some university to do theoretical work but could not find any.

In 1944, he was offered directorship of Kodaikanal Observatory but being a theoretician he did not want to take up any administrative position in an observatory.

After independence, he was invited by Homi Bhabha to join the Tata Institute of Fundamental Research in Mumbai but he was advised by several people against it. He did not take up the offer.

In October 1953, Chandra and his wife Lalitha became US citizens.

It is commonly not known that Chandra actively considered returning back to India in early 1980's.  A part of the new building at Raman research Institute was redesigned for Chandra's convenience at Bengaluru.

Assurances were given by government of India that he would be exempt from paying taxes and he could retain his US citizenship.

However, the award of the Nobel Prize to Chandra in recognition for his work on theoretical astrophysics, specifically the Chandrasekhar limit for white dwarfs in 1983 completely frustrated these plans as Chandra felt that after getting the Nobel Prize it would be ungracious and ungrateful if he left the United States at that juncture.