The Central Bureau of Investigation (CBI) has registered a fresh first information report (FIR) against former Bihar chief minister Lalu Prasad Yadav and family members for allegedly taking over one lakh sq ft land in Patna from candidates in return for Group D jobs in Railways during 2004-09 when he was the railway minister in the United Progressive Alliance government, officials said Friday. 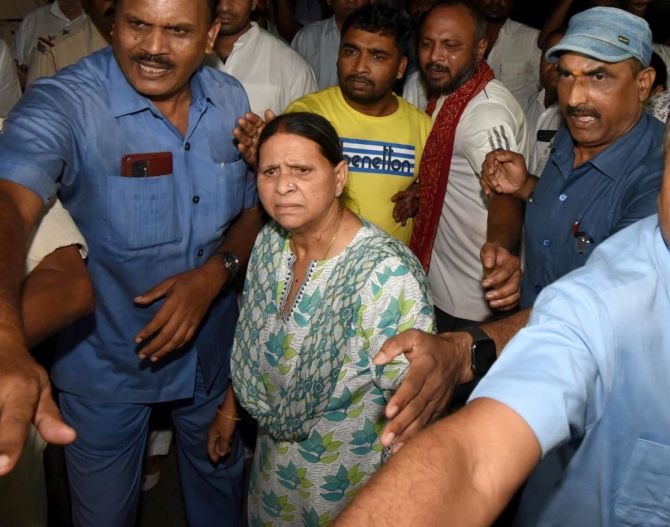 Following the registration of FIR on May 18 by the Economic Offences wing of the CBI, the agency started a search operation at 16 locations in Delhi, Patna and Gopalganj at the premises of Prasad, his family members and other accused.

The CBI has named Prasad, his wife Rabri Devi, and daughters Misa Bharti and Hema Yadav, in addition to 12 people who were given jobs in Railway zones of Mumbai, Jabalpur, Kolkata, Jaipur, Hajipur, the officials said.

The central agency had registered a preliminary enquiry on September 23, 2021 related to the land-for-jobs scam in Railways.

The candidates were appointed as substitutes in Group D positions within three days of applying in 'undue haste' by Railway officials and were later regularised 'in lieu thereof the individuals themselves or their family members transferred their land'.

One sale deed was executed in the name of a company A K Infosystems Private Limited in which Rabri Devi became a majority shareholder in 2014 and currently one of the directors of the company, the FIR alleged.

Lalu Prasad's family allegedly paid Rs 3.75 lakh to Rs 13 lakh for the lands acquired by them which according to circle rates were approximately valued at Rs 4.39 crore, the CBI alleged.

Choudhary for Rs 4.21 lakh in 2008. Choudhary was later appointed as substitute in Hazipur and he subsequently transferred the land in 2014 to Hema Yadav.

'The value of said land as per prevailing circle rate at the time of gift was Rs 62.10 lakh,' the FIR alleged.

According to the CBI probe so far, about 1.05 lakh sq feet land situated at Patna was acquired by family members of Lalu Prasad by making payment to the sellers in cash.

'The current value of above said seven parcels of land including the land acquired through gift deeds as per existing circle rate is about Rs 4.39 crore... Enquiry has revealed that parcel of land which was directly purchased by the family members of Shri Lalu Prasad Yadav from the sellers were purchased at lower rates than the prevailing circle rates,' the FIR alleged.

It said that the persons were appointed in Railways without any advertisement or public notice issued for the purpose in the zonal railways.

'Enquiry revealed that undue haste was shown in processing certain applications of candidates and surprisingly within three days from the date of receipt of respective applications, their appointments as substitutes, were approved,' it said.

The applications, without complete address of the respective addressees, were processed and approved for appointment, the enquiry has shown.

The fresh case comes weeks after Prasad was released on bail in the fodder scam in which he was convicted by a special court in Ranchi.

The CBI had earned the sobriquet from an observation of the Supreme Court, calling it a 'parrot' of political masters during the UPA government

"They (BJP) try to scare others by targeting someone. Nobody will be scared. Neither will we, nor they and nor the people of Bihar," RJD spokesperson and Rajya Sabha member Manoj Kumar Jha said after the CBI action.

He did not elaborate as to what he meant by others.

Recent meetings between Bihar Chief Minister Nitish Kumar and RJD's Tejashwi Yadav have triggered speculation about realignment of political forces in Bihar, with the relations between Kumar's Janata Dal-United and its ally Bharatiya Janata Party being seen as far from smooth.

Jha said he was not surprised at the CBI action but was sad seeing where the BJP was taking Indian democracy to.

This is an attack on democracy, he alleged.

The CBI case, he alleged, was like a 'dead bird' which has been given a new life as Tejashwi Yadav has been working to rally masses over real issues such as unemployment and caste census.