The Central Bureau of Investigation has booked a former Commandant of the 36 BSF Battalion and three others, including an alleged illegal cattle-trade kingpin, over rampant cattle-smuggling on the India-Bangladesh border, officials said on Wednesday. 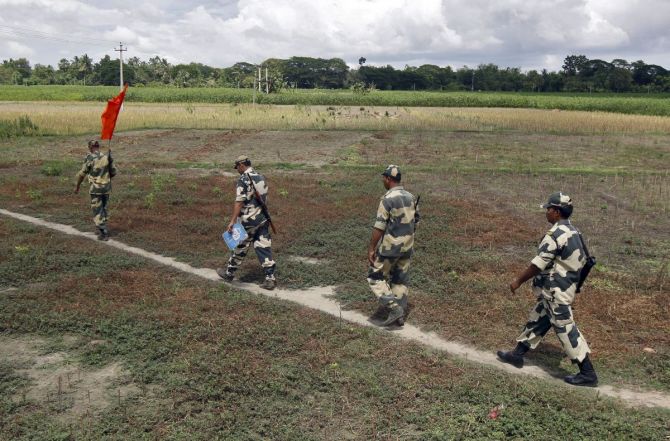 The case has been registered against Satish Kumar, a former Commandant of the 36 BSF Battalion, alleged cattle smuggling kingpin Enamul Haque and two others -- Anarul SK and Mohammed Golam Mustafa, the officials said.

Kumar is now posted in Raipur, they said.

Haque was also arrested in March, 2018 by the CBI for allegedly bribing another BSF Commandant, Jibu T Mathew, who was arrested at the Alappuzha railway station in January 2018 with Rs 47 lakh cash.

The agency started digging into Haque's alleged illegal activities through a preliminary enquiry in April, 2018 to unearth his connections with other government officials who facilitated his nefarious business across the India-Bangladesh border.

During enquiry, it emerged that cattle smuggling was rampant along the border and is aided by some corrupt officers of the BSF and Customs who were receiving illegal gratification from the smugglers, the officials said.

The Border Security Force (BSF) is tasked with guarding the border with Bangladesh.

The agency said Satish Kumar was posted as Commandant of the 36 BSF Battalion in Malda district between December, 2015 and April, 2017 with four companies under him deployed on Murshidabad and two in Malda along the border.

During his posting, the BSF seized over 20,000 cows meant for smuggling, but vehicles to transport them and smugglers were never caught, they said.

As part of a deep-rooted nexus between smugglers and some officials of the Customs and the BSF, these cattle were shown on paper as smaller in weight and size and their breeds were also manipulated in records reducing their price during auctions conducted immediately after the seizure, they said.

The CBI alleged Haque, Anarul and Mustafa bought these cattle back at a cheaper rate during the auction conducted by the Customs Department, they said.

"It is alleged that in lieu of such favours Md. Enamul Haque used to pay Rs 2,000 per cattle to BSF officials and Rs 500 to concerned Customs officials.

"Besides, the officials of Indian Customs used to take bribe of 10 per cent of the auction price from successful bidders like Haque, Mustafa, Anarul Sheikh etc," the CBI alleged.

The BSF had not raised any grazing charges on the Customs Department for feeding the seized cattle but Rs. 50 per cattle was to be paid by the successful bidders to the officials of the force, the CBI said in the first information report.

It is also alleged that Kumar's son was employed in a company promoted by Haque where he was paid Rs 30,000 to Rs 40,000 per month between May, 2017 and December 2017, which reflects upon 'his close relationship with partners of this unholy nexus', the CBI alleged. 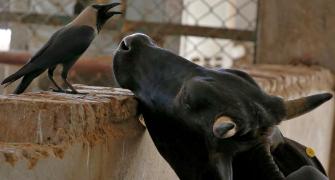 45 cows seized from smugglers die in a Tripura shelter