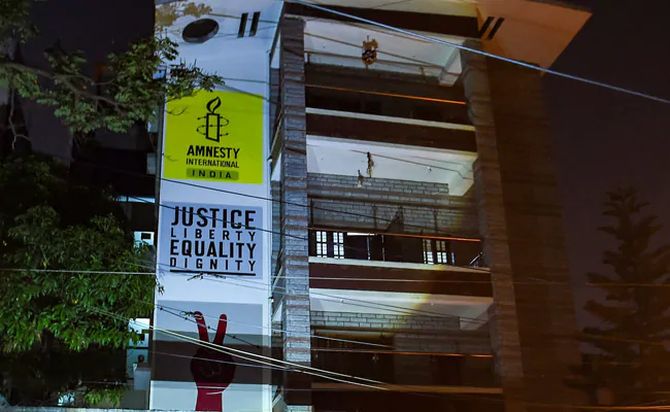 The Central Bureau of Investigation on Friday registered a case against Amnesty International India and three of its associate organisations for alleged violation of laws pertaining to Rs 36 crore foreign funding, officials said.

After the case was registered, the CBI carried out searches at four places in the national capital and Bengaluru.

Officials said the CBI registered the case on November 5 following a complaint lodged by the Home Ministry for alleged violation of the provision of the Foreign Contribution (Regulation) Act, 2010 and Indian Penal Code.

It was alleged that the provision of the FCRA and Indian Penal Code were contravened by the aforesaid entities by receiving foreign contributions from Amnesty International UK through AIIPL even though prior registration or permissions were denied to AIIFT and other trusts under FCRA, the officials said.

'Amnesty International India stands in full compliance with Indian and international law. Our work in India, as elsewhere, is to uphold and fight for universal human rights.

'These are the same values that are enshrined in the Indian Constitution and flow from a long and rich Indian tradition of pluralism, tolerance, and dissent,' the Amnesty said in the statement.

According to a complaint filed by the Home Ministry to the CBI, AIIPL is a 'for-profit' company.

It was observed that London-based Amnesty International worked through four companies, which have been named by the CBI in the case.

Another Rs 26 crore has been remitted to Amnesty India, 'primarily from the United Kingdom based entities'.

"All such receipts have subsequently been expended on Amnesty's NGO activities in India, in violation of FCRA".

It alleged that the Amnesty made several attempts to obtain prior permission or registration under FCRA, failing which, it used 'commercial methods to evade FCRA'.

The amount was classified as 'compulsory convertible debenture' but was shown in Income Tax returns as 'long term borrowing'.