Trinamool Congress leader in the Lok Sabha Sudip Bandyopadhyay was on Tuesday arrested by the Central Bureau of Investigation in the Rose Valley chit fund scam, provoking a violent attack by his supporters on Bharatiya Janata Party's state headquarters in Kolkata which left several people injured and set off a fresh bout of recrimination between the two parties. IMAGE: TMC MP Sudip Bandopadhyay being taken by the CBI officers to Bhubaneswar for further inquiry after he was arrested in connection with Rose Valley chit fund scam in Kolkata. Photograph: PTI Photo

Bandyopadhyay, the second TMC MP to be arrested in the scam within a week after actor-turned-politician Tapas Pal, was earlier subjected to questioning for more than four hours, CBI sources said.

"Bandyopadhyay could not give proper answer regarding Rose Valley-sponsored foreign trips and he did not cooperate in the investigation," they said.

BJP national secretary Rahul Sinha claimed 15 party workers were injured in the attack. As the protest continued, a CRPF contingent was rushed to secure BJP office and ensure safety of its workers.

In his first reaction after being arrested, Bandopadhyay said it was a reflection of his party's good performance in Parliament against demonetisation.

"It is the reflection of a good performance in the Parliament (by TMC in opposing demonetisation)," Bandopadhyay told reporters while being whisked away to the airport in Kolkata.

Bandopadhyay was taken to the airport on way to Bhubaneswar for his production in a court there.

Before that, a routine medical check up was conducted on the TMC leader.

A CBI statement said he has been charged under IPC sections 420 (cheating), 408 (criminal breach of trust), 120b (criminal conspiracy) and 34 (common intention) and various sections of Prize, Chits and Money Circulation (Banning) Act of 1978.

He would be interrogated afresh by the CBI in Bhubaneswar in the case which was lodged in the Odisha capital.

Another TMC MP Tapas Pal, arrested in the same case on December 30, is under CBI custody in Bhubaneswar. 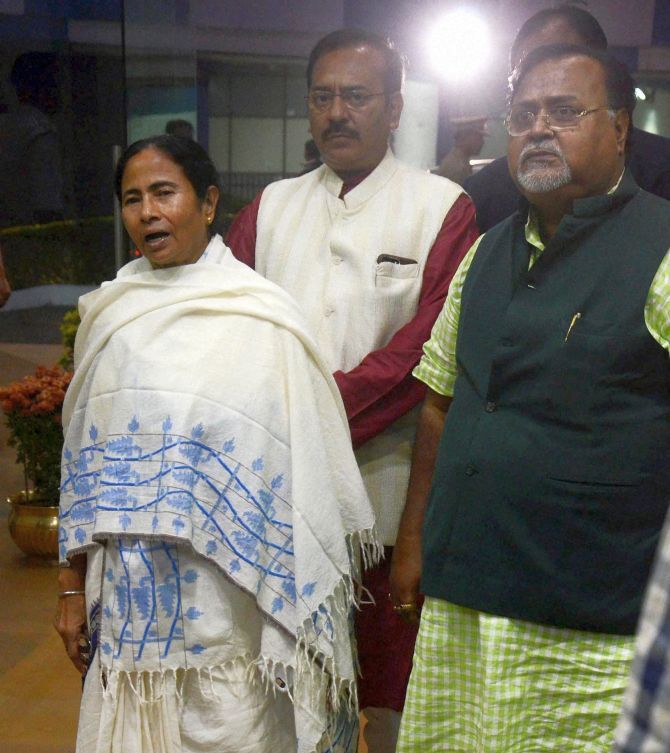 Stung by Bandyopadhyay's arrest, a furious Mamata Banerjee accused Prime Minister Narendra Modi of using central agencies like the CBI, the Enforcement Directorate and the Income Tax department against his political rivals who were raising their voice against demonetisation.

Mamata alleged that Bandyopadhyay was arrested under "pressure from the PMO" and wondered "why should Narendra Modi and Amit Shah not be arrested?"

"I just can't think that Sudip Bandyopadhyay, who is our party's leader in the Lok Sabha will be arrested. I also have information that Modi wants to arrest many other TMC leaders like Abhishek Banerjee, Sovan Chatterjee (city mayor) and Firhad Hakim (minister)," she told reporters immediately after his arrest.

"I am shocked, but not scared. Let him arrest all of us. I openly challenge him to arrest me. Let me see his guts. He may silence others, but not me. He can't suppress our voice. He can't bulldoze people's voice," she said.

"We will fight legal battle in every case. The party is behind Sudip. He has not done anything wrong. Even if he is in jail, the people of Bengal will keep him in their hearts," she said.

TMC national spokesman Derek O'Brien said an emergency meeting of the party was held where it was decided that all its Lok Sabha and Rajya Sabha members will go to Delhi on Wednesday and protest against the "financial emergency" and other "emergency" in the country. 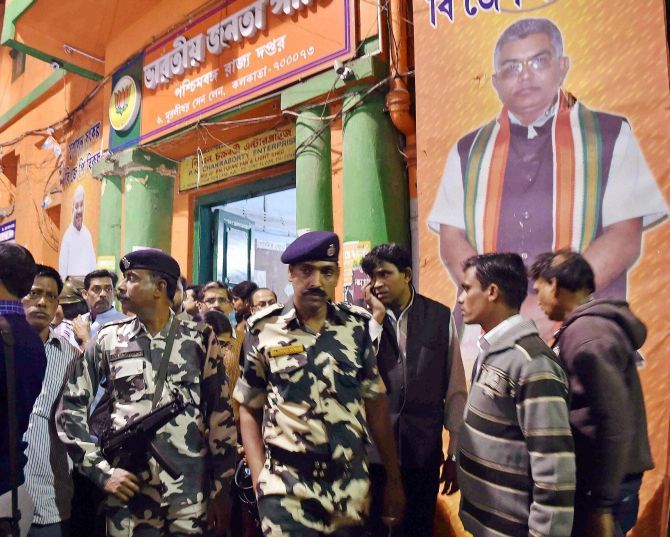 The BJP reacted strongly to Mamata's allegation of "vendetta politics" with BJP national secretary and incharge of West Bengal Siddharth Nath Singh saying the "sins" of her rule were being exposed by the law now.

"She should stop making these baseless allegations. The rule of law is the same for everybody. My question is why only TMC leaders are being found to be involved in all the chit fund scams across the state," he said.

He said the CBI was working on the direction of the Supreme Court as 17 lakh poor people had been looted in West Bengal by the perpetrators of the chit fund scam.

Singh said Mamata being a "constitutional authority" should cooperate with the probe.

Mamata, on her part, said it was the duty of the Centre, the Sebi and the RBI to keep a check on ponzi schemes in which they have "failed completely".

"I challenge Modi directly. You cannot do anything because Trinamool Congress is right and you are wrong. You cannot suppress the voice of the people. you have to withdraw restrictions (on withdrawal of cash)... Modi has no clue where this political vidictiveness will take him. We are not scared and will continue our demonstration against demonetisation," she said. 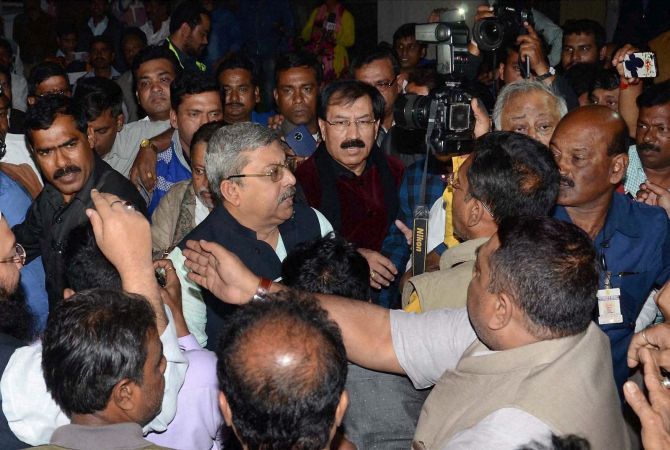 BJP's state unit president Dilip Ghosh said, "People carrying flags of the TMC threw stones at our office because their leader has been arrested in a scam. Is this democracy? They should have thought about it before looting common people."

Reacting to Bandyopadhyay's arrest, Union Coal and Power minister Piyush Goyal said if someone did any wrong he would get caught.

"If someone has done any wrong, he will get caught. If someone tries to cover his or her own wrongdoing by baseless allegations..... We never interfered in investigative affairs," Goyal, who was in the city, said.

The Enforcement Directorate had recently attached assets to the tune of Rs 1,250 crore, including eight hotels and a Rolls Royce luxury car, in connection with its money laundering probe in the Rose Valley chit fund scam case.

The agency had registered an FIR against the firm, its Chairman Gautam Kundu and others in 2014 under the provisions of the Prevention of Money Laundering Act. Kundu was arrested last year and is currently in judicial custody.

The group had allegedly floated a total of 27 companies for running the alleged chit fund operations out of which only half-a-dozen were active. It has been alleged that the firm had floated schemes promising inflated returns on investments between 8 and 27 per cent to gullible investors in various states.