Source: PTI
October 04, 2012 19:57 IST
Protests against release of Cauvery water to Tamil Nadu snowballed in the river basin areas on Thursday, as a central team arrived in Bangalore to assess the water storage levels.

In Mandya, the hotbed of Cauvery politics, farmers led by a body spearheading the stir, on Thursday began a relay fast and gave a call to all MLAs in the Cauvery basin districts to resign en masse.

President of the Cauvery Hitarakshana Samithi G Madegowda, who is always at the forefront of the Cauvery agitation, ignored appeals from political leaders to give up fast considering his age and ill-health and lashed out at the Karnataka Chief Minister Jagadish Shettar for "betraying" farmers and people.

Bangalore witnessed a spate of protests in various parts, which triggered off traffic snarls and effigies of Tamil Nadu Chief Minister J Jayalalithaa were burnt.

Farmers said though water had been released from Mettur following good inflows after Karnataka started releasing water as per a Supreme Court directive, water had not reached the channels due to indiscriminate sand mining in the river beds.

As the Cauvery row intensified, a four-member central team led by CWC Director B P Pandey arrived in Bangalore for an on the spot assessment of the water storage level in Cauvery basin.

Officials of Karnataka Cauvery Neeravari Nigam (Irrigation Corporation) said, the team would interact with officials of the state and visit Cauvery basin districts on Friday.

The farmers gheraoed Opposition Congress leader Siddaramaiah when he arrived in Mandya to participate in the relay fast blaming the Congress for failing to impress on Prime Minister Manmohan Singh about the water scarcity in the state.

Singh told reporters that the team will visit the Cauvery delta area and submit its report to the central government in about four days.

The Karnataka government began releasing water after the Supreme Court asked it to abide by the September 19 directive of the Cauvery River Authority, headed by the PM till October 15. 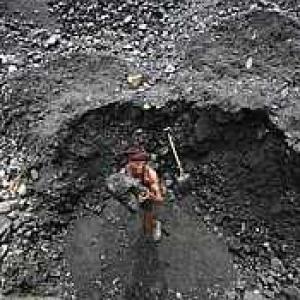