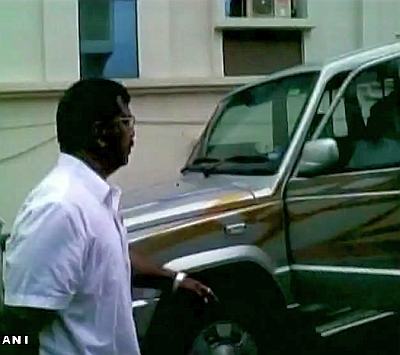 Amid a raging row over the cash-for-vote scam, ACB sleuths on Tuesday conducted searches at the residences of TDP MLA Revanth Reddy and two others arrested in connection with the case.

As the bitterness between the ruling parties in the adjoining states soared, over 50 cases were registered by the Andhra Pradesh Police against Telangana Chief Minister K Chandrasekhar Rao over alleged illegal tapping of the phones of his Andhra Pradesh counterpart Chandrababu Naidu in the case.

Three teams of anti-corrution bureau sleuths conducted simultaneous searches at the residences of Reddy, Sebastian Harry and Uday Simha but the officials said that no incriminating documents were found.

ACB Deputy Superintendent Ashok Kumar, however, said one computer CPU from the MLA's house had been confiscated.

"Searches were carried out as per procedure and in the presence of family members of the accused...The idea was to seize material connected to this case," an ACB officer, who was part of the search teams, said.

He said the accused will be produced before the special ACB court in Hyderabad on Tuesday evening on completion of their four-day police custody period.

On May 31, ACB arrested Reddy and two others while they were allegedly trying to hand over Rs 50 lakh as bribe to nominated MLA Elvis Stephenson to vote for TDP nominee in the Telangana Legislative Council polls.

Based on complaints by TDP workers accusing the Telangana government of illegally tapping Naidu's phone, the cases were registered under different sections of IPC and relevant provisions of the Indian Telegraph Act, police said.

"In the complainants it was also accused that by tapping Naidu's phone they (Telangana government) "indulged in defaming and destabilising" the Andhra Pradesh government," a senior police officer said.

The controversy erupted after some TV channels on Sunday aired an audio tape containing a purported phone conversation between Naidu and nominated MLA Elvis Stephenson, triggering a fierce war of words between the chief ministers of Andhra Pradesh and Telangana on the illegal tapping of phones besides the bribe row.

Naidu denied that it was his voice and accused Rao of conspiring against him and called Congress President Sonia Gandhi a "betrayer" for dividing Andhra Pradesh. The TRS hit back asking whether he was ready to undergo a lie-detector test.

"I am ready, if Chandrababu Naidu is ready. We will both take a lie detector test on live TV. He should appear before the world on whether he has indulged in corrupt practices.

Those guilty will have to come before public," Telangana IT minister Rama Rao had said.

Naidu, claiming that he has led a life of integrity all along, alleged that what is going was the result of a combined conspiracy by the TRS, Congress and YSR Congress against him.

"The Congress, TRS and YSR Congress party are again conspiring against me. I have lived with honesty and for public service. While Andhra Pradesh develops, KCR is unable to do anything and is conspiring against me," Naidu said and warned Rao against "stretching things too far."