Moving ahead with its probe in the cash-for-bail scam in Andhra Pradesh, the state Anti-Corruption Bureau on Thursday arrested two serving judges for their alleged role in the case involving former Karnataka minister Gali Janardhana Reddy, an accused in the illegal mining case.

D Prabhakar Rao, a Family Court-cum-3rd Additional district and sessions judge of Srikakulam, and K Lakshminarasimha Rao, chief judge of city small causes court, were on Thursday arrested by the agency from their respective residences in the city.

While Prabhakar Rao was placed under suspension by the Andhra Pradesh high court last week, Lakshminarasimha Rao was suspended on Wednesday after the ACB sleuths conducted searches at his house. His name had cropped up during interrogation of one of the arrested accused in the case.

Prabhakar Rao is the seventh person and the third serving judge to be nabbed by the ACB, which took over the probe in June, on the  direction of the high court after the CBI had exposed an alleged 'deal' of Rs 10 crore for granting bail to the mining baron.

Both Lakshminarasimha Rao and Prabhakar Rao would be produced in the ACB court later in the day, an ACB official said.

Prabhakar Rao, who worked as secretary (legal) in the Andhra Pradesh State Election Commission, had allegedly contacted T Pattabhirama Rao for facilitating bail to Reddy, an accused in the Oblapuram Mining Company case.

The high court has so far suspended these three judges in connection with the cash-for-bail scam.

Also, T Pattabhirama Rao and seven others have been booked under relevant sections of the Indian Penal Code for criminal conspiracy and criminal misconduct. 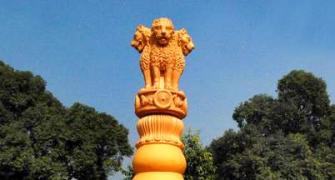 Cash-for-bail scandal: How the 'deal' was struck