The Centre has told the Supreme Court that ex-gratia compensation of Rs 4 lakh cannot be paid to the families of those who have died of COVID-19 as it is beyond fiscal affordability and the finances of central and state governments are under severe strain. 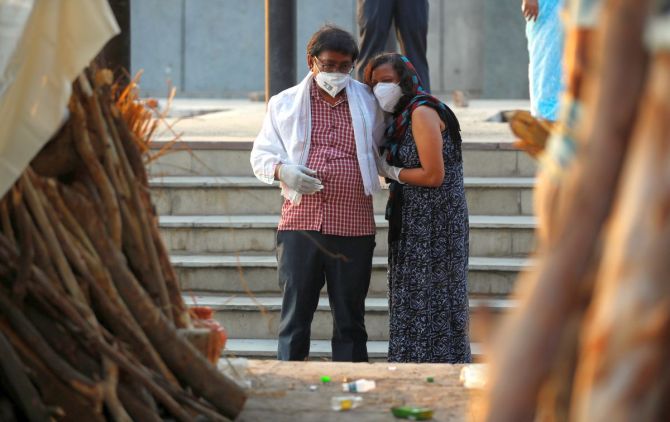 IMAGE: A couple mourns as they stand next to the funeral pyre of a relative who died due to the coronavirus disease at a crematorium in New Delhi. Photograph: Adnan Abidi/Reuters

In an affidavit filed before the top court, the ministry of home affairs said the Centre submitted that it has by ways of "Minimum Standard Relief", under section 12 of the Disaster Management Act, 2005, taken several steps providing for substantial and speedy measures by way of increase in health, infrastructure, ensuring food safety to every citizen.

"The prayer of the petitioner for payment of ex-gratia to all deceased persons due to COVID-19 is beyond the fiscal affordability of the state governments. Already the finances of state governments and the central government are under severe strain due to the reduction in tax revenues and increase in health expenses on account of the pandemic.

"Thus, utilisation of scarce resources for giving ex-gratia may have unfortunate consequences of affecting the pandemic response and health expenditure in other aspects and hence cause more damage than good. It is an unfortunate but important fact that the resources of the governments have limits and any additional burden through ex-gratia will reduce the funds available for other health and welfare schemes," the affidavit filed by the Centre said.

It further submitted that under the Disaster Management Act, 2005, Section 12, it is the "National Authority" which is empowered to recommend guidelines for the minimum standards of relief, including ex-gratia assistance and this is the function entrusted to the authority by the law passed by the Parliament.

"It is well settled through numerous judgments of the Supreme Court that this is a matter which should be performed by the authority, to whom it has been entrusted and not one where the Court will substitute its own judgement for the decision to be taken by the Executive.

"Any attempt to second guess may create unintended and unfortunate constitutional and administrative ramifications. It may also be noted that the term 'ex-gratia' itself connotes that the amount is not based on legal entitlement," the affidavit stated.

The Centre told the apex court that it is wrong to state that the help can be provided only through ex-gratia assistance as "it would be a rather pedantic and narrow approach".

"A broader approach, which involves health interventions, social protection, and economic recovery for the affected communities, would be a more prudent, responsible, and sustainable approach. Globally, the governments in other countries too have followed this approach, and have announced interventions that provide fiscal stimulus. Government of India has followed a similar approach," it said.

Earlier, on June 11, the Centrehad told the top court that issues raised in the pleas, seeking directions for ex-gratia compensation of Rs 4,00,000 to the families of those who have died of COVID-19, are ‘genuine’ and are under consideration of the government.

On May 24, the top court had sought the Centre's reply on two petitions seeking ex-gratia compensation of Rs four lakh to the families of those who have died of COVID-19 and had said that there should be a uniform policy for issuing death certificates to those succumbing to the virus.

The court had also asked the Centre to place before it the Indian Council of Medical Research guidelines on death certificates for COVID-19 victims, saying there should be a uniform policy for issuing such documents.

The counsel appearing for the Centre had on May 24 sought time to obtain instructions and bring all relevant materials regarding the scheme under Section 12(iii) of the Disaster Management Act, 2005 as well as the letter dated April 8, 2015, issued by the Ministry of Home Affairs with regard to compensation.

The apex court is hearing two separate pleas seeking directions to the Centre and the states to provide Rs 4 lakh compensation to the families of coronavirus victims as provisioned under the act, and a uniform policy for issuing death certificates.

Advocate Gaurav Kumar Bansal, one of the petitioners in the matter, had argued that under section 12(iii) of the Disaster Management Act, 2005, every family whose member died due to disaster is entitled for ex-gratia compensation of Rs 4 lakh.

He had argued that since COVID-19 has been declared as a disaster and as per the order dated April 8, 2015, every family whose member dies due to disaster is entitled for ex-gratia compensation of Rs 4 lakh.

The counsel, appearing for another petitioner Reepak Kansal, had argued that a large number of deaths were taking place due to COVID-19 and death certificates need to be issued, as only after that the affected family members can claim compensation under section 12 (iii) of the Act.

In his plea, Kansal has said that states should be directed to fulfil their obligation to take care of victims of COVID-19 and also their family members.