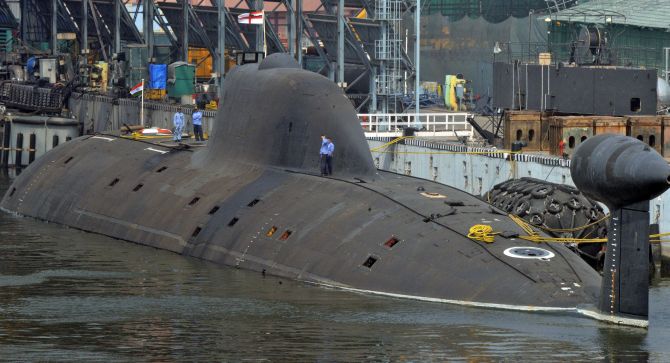 One of the Indian Navy's most vital purchases -- the contract for 6 new-generation submarines under what is dubbed Project 75-I -- will take another two-to-three years in tendering, revealed the navy's warship acquisitions chief.

This is because the contract, worth an estimated Rs 50,000 crore, will be India's last overseas submarine procurement and hence the last chance to obtain the technology for building the next 12 submarines, which the government insists must be fully indigenous.

"While interacting with original equipment manufacturers, we have to be very clear that after this technology transfer, we should be able to build our (future) submarines ourselves," Vice Admiral A K Saxena, controller of warships production and acquisition, said in New Delhi.

The 30-year submarine building plan of 1999 mandates building 12 submarines with foreign technology transfer, and the next 12 vessels indigenously.

Admiral Saxena is the first naval officer to acknowledge that insufficient technology has been transferred during the ongoing Project 75, which involves building six single-hulled, Scorpene-class submarines with knowhow from French-Spanish shipbuilder Armaris (now Naval Group).

"The depth of design transfer is not that high as we would have liked, and that technology gap is what we are going to fill up with Project 75-I," he said.

Admiral Saxena also acknowledged that India was better at building nuclear submarines compared to conventional ones.

"Our design capability is, at present, more focused towards strategic platforms (nuclear submarines)," he added.

Consequently, negotiating the "scope, bandwidth and depth of technology transfer" with the Project 75-I OEMs will be vital, the admiral said.

"We will have to ensure that our SPs, that is the Indian shipbuilders, are able to absorb whatever is being provided by the OEMs. It will all depend upon how forthcoming the OEMs are," he explained.

Project 75-I is being executed under the strategic partner framework.

This requires foreign OEMs to provide technology and manufacturing knowhow to an Indian SP shipyard, chosen from either the private or public sector.

Leading the fray for selection as SP are Mazagon Dock, Mumbai and L&T's Kathupalli Shipyard, near Chennai.

The navy will also invite Reliance Naval to bid, given the capacity of its Pipavav Shipyard.

However, RNAVAL's financial situation might not meet the tender's tough financial eligibility conditions, mandated in a March 20 amendment to the Defence Procurement Procedure of 2016.

The navy had earlier taken a stance against RNAVAL, which was years late in delivering an order for naval offshore patrol vessels.

However, Admiral Saxena said RNAVAL was finally making some progress on delivering the first NOPV, and that "by the end of the year, it will be clear whether RNAVAL will be able to deliver or not".

Admiral Saxena expressed optimism that the OEM and SP would meet the challenging 50 per cent indigenous requirement of Project 75-I.

However, he appeared to dilute the mandated terms, indicating that it would be achieved only later in the project.

"Achieving indigenous content of 50 per cent is the progressive value we are looking at," the admiral said. "It will progressively rise from a certain value and reach or exceed 50 per cent."