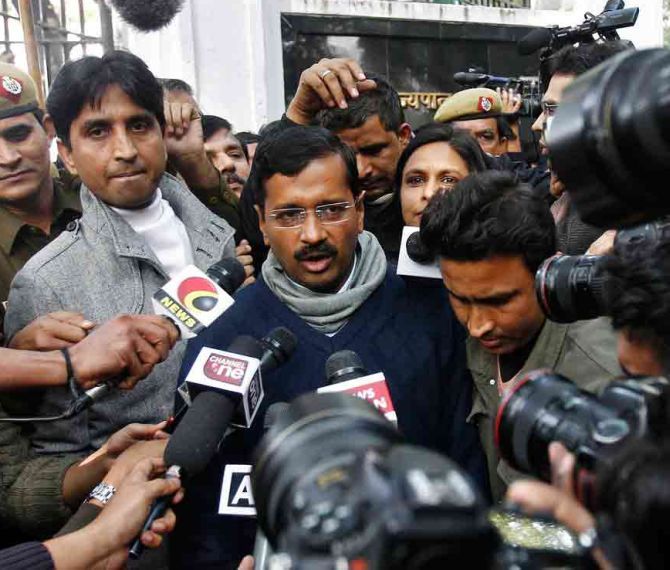 For the third front to become a reality, it needs a party that has a pan-India presence and wins more Lok Sabha seats than all other parties in the front, say experts.

Former Delhi Chief Minister and Aam Aadmi Party leader Arvind Kejriwal's dharna (sit-in) a few days ago, demanding action against some Delhi police officials for alleged dereliction of duty, got support from the most unexpected quarter: the Samajwadi Party.

The party not only supported Kejriwal’s "right to protest democratically" but also criticised the Congress-led United Progressive Alliance government for "not respecting Centre-state relations".

The move is notable because prior to this, there were a series of statements from SP leaders criticising the AAP. In a recent interview, Uttar Pradesh Chief Minister Akhilesh Yadav claimed his party workers are the 'real' aam aadmis (common men) and one red cap of an SP party worker is equal to 100 white caps of AAP.

In this context, does the SP’s open support to Kejriwal's sit-in protest mean the votaries of a third front are seriously looking up at AAP as an ally?

The Left parties, too, are not dismissive of AAP. The Communist Party of India-Marxist general-secretary Prakash Karat's stated view is that a call on the AAP will be taken only after the latter formulates its policies and programmes.

Amarjit Kaur, national secretary of the CPI, told Business Standard that like "other like-minded parties", the AAP could also have a role to play in case a third front takes shape after the Lok Sabha elections.

"The AAP is neither divisive nor communal and the kind of policies it wants to pursue, at least what we have gathered so far, is somewhat similar to what we want to do,” she says.

What she is referring to is the kind of entitlement programmes the AAP wants to pursue.

The SP and the Left parties have of late been vocal on their advocacy for a possible third front. However, apart from a joint rally attended by 11 parties, which included the four Left parties, SP, the Janata Dal-United, the Nationalist Congress Party, the Biju Janata Dal and the All India Anna Dravida Munnetra Kazhagam on October 30, 2013, not much has moved on the formation of a third front.

Left leaders candidly admit any pre-election alliance is unlikely. "We will explore the possibilities of a third front post-elections," says Kaur.

However, experts are of the view that for any front to take shape, it needs a nucleus and a group of like-minded parties. And both seem to be missing from a possible third alternative at the moment.

"Take a look at parties that are not part of either Congress-led UPA or the Bharatiya Janata Party-led National Democratic Alliance. The DMK and the AIADMK cannot stay together, the SP and the BSP are sworn enemies, Lalu Prasad’s Rashtriya Janata Dal and Nitish Kumar's JD-U cannot be part of the same alliance and the Left and Mamata Banerjee's Trinamool Congress hate each other.

This shows that choice is very limited for possible entrants to a third front," says V B Singh, former director of the Centre for the Study of Developing Societies.

The idea of a third front is always floated as a trial balloon before all Lok Sabha elections since 1996. That was when some parties, other than the BJP and the Congress, joined hands to form a third front and formed the government with the outside support of the Congress.

Incidentally, for the first time in India's electoral history, the combined vote share of two major national parties (the Congress and BJP) fell below the 50 per cent mark in 1996 Lok Sabha elections. The situation has stayed that way in all subsequent elections, with non-BJP, non-Congress parties getting more than 50 per cent votes, except in 1999.

Even in the 2009 Lok Sabha elections, parties outside of the NDA and the UPA fold polled nearly 40 per cent votes. In fact, there were six states (Andhra Pradesh, Bihar, Odisha, Tamil Nadu, Tripura and Uttar Pradesh) where others (non-NDA, non-UPA) got more than 50 per cent votes and there were 12 states where this group secured more than 40 per cent votes. This is the reason why the idea of a third front keeps coming, elections after elections.

However, for the third front to become a reality, it needs a party that has a pan-India presence and wins more Lok Sabha seats than all other parties in the front, say experts.

"Who knows if the AAP wins 30-40 Lok Sabha seats, it can provide leadership to a third alternative," observes Singh. Experts are also of the view the third front has to look for a new common ground to forge alliance as the old one has seen some erosion.

"Strong communal-secular divide was a glue that used to bring parties together for a third front. That divide has got blurred now. Another problem with the third front has been existence of too many leaders with prime ministerial ambition," says Manindra Nath Thakur of JawaharlalNehruUniversity.

Can the AAP provide that new common ground? And new leadership, perhaps?

AAP leaders publicly state they believe in going it alone. However, privately, they admit some of the parties in the possible third front may be their natural allies.

Sudhir Panwar, political analyst and professor at LucknowUniversity, who recently joined AAP, says: "With people like Yogendra Yadav and Anand Kumar, whose views are well known, in its fold, you can guess what AAP's ideological position will be." CSDS' Singh, too, agrees with this view. He says if AAP can form a government with the support of the Congress in Delhi, it can very well be part of a possible third front.