Noting that administration was appearing lax in many states with daily COVID-19 cases hitting new peaks, Prime Minister Narendra Modi on Thursday urged chief ministers to strengthen their efforts for the next 2-3 weeks to check the spread of the virus on a "war-footing" and proposed to call the night curfew clamped in many places as "corona curfew" to maintain public awareness about the pandemic. 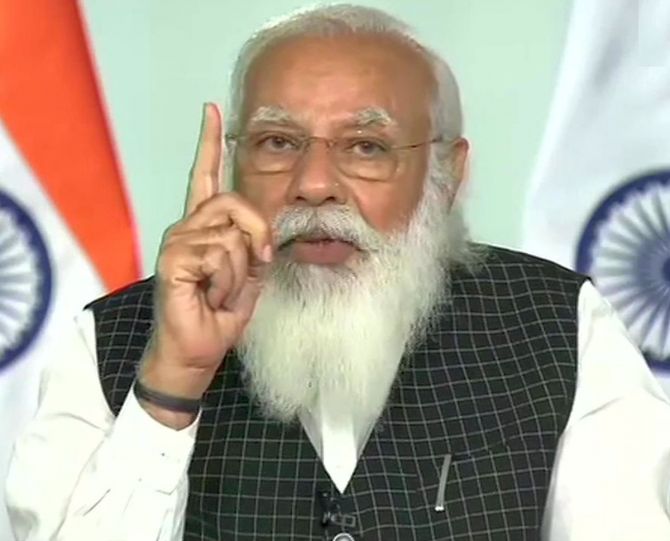 He also called for observing a vaccine festival between April 11-14 to inoculate the maximum number of eligible beneficiaries. April 11 is the birth anniversary of noted social reformer Jyotirao Phule, he noted.

In his virtual interaction with chief ministers to discuss the pandemic situation and the ongoing vaccination drive, Modi strongly defended the current eligibility criteria for vaccination amid demand by some states, ruled by opposition parties, to open the shot for all above 18 years.

India's criteria is no different from the most prosperous countries in the world, and it will have to prioritise the vaccination, Modi said. As of now, those above 45 years are eligible for taking the jab.

With the debate taking political overtones in some cases, Modi said wryly that those doing politics over the issue may do so but he will not join the issue and asked chief ministers to work together with the Centre to prevail over the pandemic.

Modi said he had been putting up with all kind of statements but has not joined the issue.

Some senior functionaries of the Maharashtra government had recently hit out at the Centre over the alleged low availability of vaccines in their state, inviting a sharp rebuke from Health Minister Harsh Vardhan. Vardhan had accused Maharashtra and some other states of doing politics over the matter.

Speaking to chief minister, Modi asked them to focus on micro-containment zone to curb the disease and reiterated his call to work on the mantra of test, track, treat besides pushing COVID-appropriate behaviour and COVID-management to bring down the peak.

Stating that the country had brought down its active cases to 1.25 lakh from 10 lakhs earlier with a similar approach, he expressed confidence that the nation will win over the crisis as it now has better resources, more experience besides vaccines.

He called for contact-tracing 30 persons within 72 hours of someone testing positive for the virus and asked states to not bother much about positive cases and focus on more testing.

With the daily coronavirus cases crossing the peak seen during the first wave in the last year, Modi said the situation is more worrisome in some states with people becoming much more casual in their behaviour and administration appearing lax in many states. This sudden surge had crated difficulties, he acknowledged.

"There is a need to improve the governance system. I understand that because of the one-year battle, the system can experience tiredness and there can be laxity, but we must tighten it for 2-3 weeks and strengthen the governance... To stop the spread of the virus, there is a need to work on a war-footing," he said.

In his address, Modi underlined that the coronavirus cases have surged past the peak during the first wave and their growth is also higher, and mentioned that states like Maharashtra, Chhattisgarh, Punjab, Madhya Pradesh and Gujarat are now reporting more cases than seen in the last year.

"Some other states are also moving in that direction. This is a matter of worry," he said.

Our efforts should be to inoculate maximum eligible people during the vaccination festival between April 11-14, he said, asking youngsters to help those above 45 years of age to get the jab.

Modi also suggests all-party meetings in states, involving governors, celebrities and other noted persons to push COVID-appropriate behaviour. This will also keep the drive beyond any political overtones, he added.

Along with public participation, the country's hard-working doctors and health-care staff have helped a lot in handling the situation and are still doing it, he said.

The daily count of positive cases has reached a new record high of over 1.26 lakh, after having dipped to below 20,000 a few weeks back.

At a high-level meeting with senior officials, Prime Minister Modi had on Sunday reviewed the COVID-19 situation and vaccination exercise in the country amid the "alarming rate of growth" in infections and deaths.

Modi had said the five-fold strategy of testing, tracing, treatment, COVID-appropriate behaviour and vaccination, if implemented with utmost seriousness and commitment, would be effective in curbing the spread of the pandemic, according to an official statement that was released after the meeting.