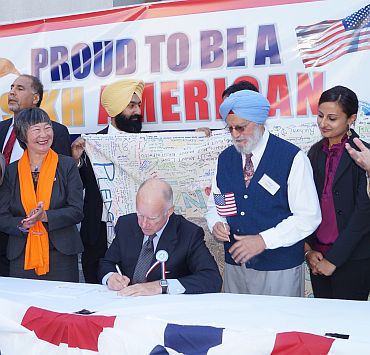 The rally was held to honour the victims of the August 5 shooting at a Sikh temple in Oak Creek, Wisconsin, that killed six people and injured several.

Governor Brown, who was surrounded the dominant Sikh community in California said, "Sikh Americans are loyal citizens who have been targeted because of widespread ignorance of their religion and culture."

He added, "The bills I sign today aim to ensure that Californians learn about our Sikh citizens as well as protect all of us from job discrimination based on religious observances."

AB 1964 by assembly member Mariko Yamada (D-Davis) clarifies that the practice of wearing religious clothing or a religious hairstyle as a belief or observance is covered by protections under the Fair Employment and Housing Act.

SB 1540 by Senator Loni Hancock (D-Oakland) requires the State Board of Education to consider adopting a revised curriculum framework and evaluation criteria for instructional materials in history-social science.

"I am really happy today," Satnam Singh Chahal, president of NAPA, told rediff.com after the bills were signed.

He added," It is a great honour not just for the people of Punjab, but all Indians and religious groups."

Chahal said that this bill authorises the State Board of Education to complete the revision process of the history-social science framework for California schools. This would be an important step for the California Sikh community, because the draft framework currently includes information about Sikhs in seven distinct areas.

When the law will be enforced, this framework will ensure that California students learn about Sikhism and Sikh contributions, thereby increasing appreciation for diversity and reducing ignorance of the sort that leads to bullying and bias.

Expressing his great satisfaction about the passing of bill AB1964 Chahal said that this law will sharply reduce job discrimination against Sikhs and other religious minorities and guarantee equal employment opportunity to all workers in California.

According to the Sikh Coalition, although Sikhs have lived in California for more than a century, Sikh Californians suffer high levels of employment discrimination because of their Sikh articles of faith, which include a turban, beard, and unshorn hair.

According to a research report issued by the Sikh Coalition in 2010, approximately 12 per cent of Sikhs in the San Francisco Bay Area reported suffering discrimination in employment.

Law enforcement agencies in California have rejected requests to hire Sikh police officers, despite decisions by the United States Army, Federal Protective Service, and Washington DC Metropolitan Police to allow Sikhs to serve in uniform, in full compliance with health and safety requirements, without sacrificing their articles of faith.

"AB1964 strikes a fair balance by upholding the principle of equal employment opportunity," said Rajdeep Singh, director of Law and Policy for the Sikh Coalition.

"What people do for a living is a source of dignity, and in 21st century America, no person qualified to do their job should have to choose between religious freedom and their livelihood."

Consulate General of India, N Parthasarathi said in San Francisco, "This is a great rally. In front of 500-plus people the governor signed the Bill -- that was fantastic."

He said that NAPA has taken the great initiative of bringing the whole community. The governor in past one month has passed three bills -- India's Independence Day, he paid tribute to Wisconsin victims, AB 1964 and SB 1540.

"It is a great honour and acknowledgement of the Asian Indian community contributions and their peaceful existence," the consul general told rediff.com, adding that the fact that the community is getting into a mainstream in a big way.