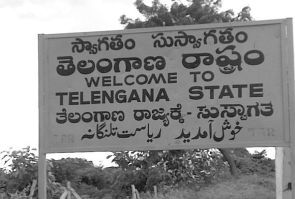 The Union Cabinet on Thursday night gave the go-ahead for the creation of a 10-district Telangana and outlined the blueprint for carving out the country's 29th state from the current Andhra Pradesh.

Dropping a controversial move to add two districts of Rayalaseema to Telangana, which was opposed by various stakeholders, the cabinet, presided over by Prime Minister Manmohan Singh, approved a draft reorganisation bill based on recommendations of Group of Ministers.

The decision of the cabinet came after the Congress Core Group met in the morning and cleared the CWC resolution of Telangana with 10 districts.

The bill will be sent to the President on Friday with a request to make a reference to Andhra Pradesh assembly to obtain its views, Home Minister Sushilkumar Shinde told reporters after nearly a three-hour long cabinet meeting.

Shinde said government wants to bring the bill in the winter session of parliament but it depends on when the President returns the bill after signing it.

The highlights of the bill are: Telangana will comprise 10 districts and the rest of Andhra Pradesh comprises 13 districts.

Hyderabad will remain the common capital for both the states for a period not exceeding 10 years.

The Governor of Telangana will have a special responsibility for security of life, liberty and property of all those who reside in the common capital area. The Governor may be assisted by two advisors to be appointed by the Government of India.

The government of India will extend financial and other support to the creation of a new capital for the successor state of Andhra Pradesh to be identified by an expert committee.

Institutional mechanism with full involvement and participation of government of India will be put in place to manage water resources and projects on Krishna and Godavari rivers in an amicable and equitable manner.

Polavaram will be declared as a national project and will be executed by the union government following all environmental and R&R norms.

Detailed provisions have been made in the bill on matters relating to coal, power, oil and gas, division of assets and liabilities and allocation of government employees.

The government of India will assist the two states in augumenting their police forces for maintaining public order.

Article 371 D will continue for the both states to ensure equitable opportunities for education and public employment.

Existing admission quotas in higher technical and medical institutions will continue for a period not exceeding five years.