In a major reshuffle, the Assam government on Thursday replaced the Guwahati Police commissioner and a senior officer responsible for law and order in the state, amid violent protests against the Citizenship (Amendment) Bill, officials said. 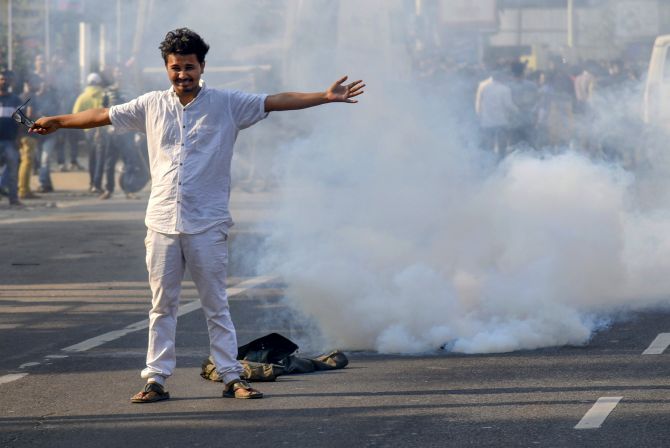 IMAGE: A protester stands in the foreground of a teargas shell during a protest against the Citizenship Amendment Bill during a strike in Guwahati. Photograph: PTI Photo

Gupta was earlier posted in the Special Protection Group.

Additional director general of police (law and order) Mukesh Agarwal was transferred as ADGP (CID) and GP Singh was given his charge.

Singh was earlier posted in New Delhi as inspector general of police at the National Investigation Agency.

ADGP SN Singh and deputy inspector general of police Anand Prakash Tiwari has also been brought in to supervise the law and order situation in the state, they said.

Meanwhile, suspension of Internet services in ten districts of Assam was extended for 48 hours on Thursday, beginning 12 pm, to prevent "misuse" of social media to disturb peace and tranquility, and to maintain law and order, officials said.

Internet services were suspended at 7 pm on Wednesday amid massive protests against the Citizenship (Amendment) Bill.

Thousands of people defied curfew in Guwahati and took to the streets, prompting police to open fire, even as protests against the contentious Bill intensified in the state.