The Opposition in Rajya Sabha on Tuesday tore into the government, accusing it of hiding the real picture of economy and creating 'destructive' issues like the Citizenship Amendment Act and the National Register of Citizens to polarise the society and divert attention from key challenges like economic slowdown, farm distress and unemployment. 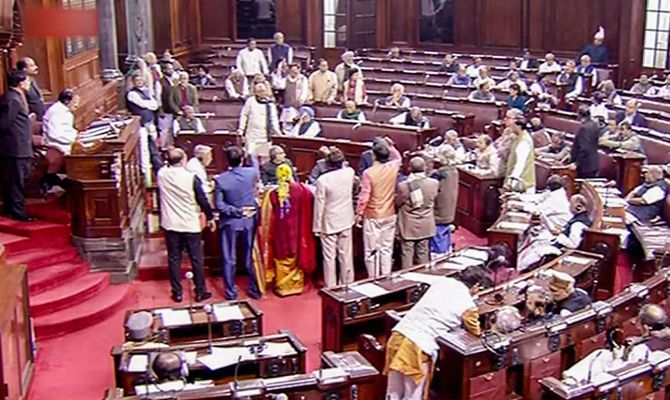 As the House took up the debate on Motion of Thanks on the President's Address, the Bharatiya Janata Party launched a frontal attack on opposition parties specially the Congress for their stance against the CAA, saying they were trying to divide the nation.

Initiating the debate, senior BJP leader Bhupender Yadav accused the Congress and the Aam Adami Party of giving 'moral support' to Shaheen Bagh stir and said young minds were 'poisoned through hate-filled speeches' in the name of freedom of expression during the anti-CAA protests.

He said none of these leaders or parties supporting the protests have raised issues of atrocities against minorities in Islamic nations and were busy politicising the issue for petty self interest.

Yadav alleged that by passing resolutions against the CAA, states ruled by non-BJP parties were hurting the Constitution.

"Oppose us but don't divide India.... Don't like us but let positive development happen," he said.

He quoted a statement by Trinamool COngress MP Derek 'O Brien on how his relatives who went to Pakistan had to migrate and how those who came to India prospered.

"We have got the citizenship law so that O'Briens remain O'Briens and are not forced to convert to other religions," Yadav said.

"Your ideas or proposals are not constructive but destructive."

Azad also expressed the hope that the government would soon realise its 'mistake' of bifurcating Jammu and Kashmir into Union Territories and bring a bill in this session to restore its statehood.

As many as 477 amendments to the Motion of Thanks were listed in the House.

TMC MP Sukhendu Sekhar Ray alleged that the government is using the name of Mahatma Gandhi to hide its 'camouflaged agenda of religious persecution and division' through CAA and National Register of Citizens.

"They are using the name of Gandhi ji, just to mask it.... A minister of this government is publicly asking to shoot the people," he alleged.

He targeted the government over the state of the economy and criticised its disinvestment policy, saying it is on a mission of 'beecho (sell) India'.

The government is selling PSUs along with Life Insurance Corporation, which are properties of the people and steps are being taken without inviting any suggestions from policy makers and employees unions, he said

Ray said his party has moved amendments seeking changes in the President's address as it does not give the real picture of the economy.

"President's speech has not mentioned about the growth of the economy. It is the first time in the history that RBI has changed the growth forecast three times," he said.

Talking about the ongoing agitation against the Citizenship Amendment Act, Telangana Rashtra Samiti member Keshava Rao asked the government to sit with the protesters to find a solution.

He alleged that attempts were being made to polarise the society.

Elamaram Kareem of Communist Party of India-Marxist said the President's speech missed the real issues of the people and the country as it did not mention the ongoing economic crisis.

The government has failed in upholding the Constitution, he alleged and added that mandate does not mean that the government would 'pass legislations on its whims and fancies'.

Participating in the debate, Tiruchi Siva (Dravida Munnetra Kazhagam) said 'federalism is crumbling, secularism is fading and socialism is becoming capitalism' under the present dispensation.

He also accused the BJP-led government of 'polarising the society'.

"The entire country is on road, students are agitating. Democracy is under threat. Everyone in the country is living in a fear," Siva claimed.

Sanjay Raut of Shiv Sena, a former ally of the BJP, alleged that an atmosphere of hate is being created to break the country and there is a 'civil-war like situation'.

On the agitation against the CAA, Raut said the protesters are citizens of this country and the government should sit with them and allay their fears.

The government should follow it own agenda of 'Sabka Saath, Sabka Vikas and Sabka Vishwas', he said.

Raut claimed Shiv Sena was 'betrayed' after its 30-year association with the BJP.

Taking a jibe, he said economic growth will not increase by giving the longest Budget speech.

On repealing Article 370, Raut said Shiv Sena had supported this decision, but there is still unrest in the Valley. As many as 12 army personnel from Maharashtra have died in Kashmir, he added.

He asked the government how many jobs have been created and industry set up in Kashmir. Raut said he wants to buy land in Kashmir but has not succeeded.

Raut welcomed the Prime Minister's comment that India can defeat Pakistan in 8-10 days, but said the government should fulfil its duty towards the forces as paramilitary forces are facing economic problems and 'not getting salary and wages on time'.

Raut said the forces also do not have bullet proof jacket, ice boots and other necessary items. "This is not the report of tukde-tukde gang but of CAG."

The Sena MP's remarks led to a heated exchange of words between Shiv Sena and BJP members.

Rakesh Sinha (Nominated) opposed Raut's comments but could not be heard.

However, Raut said he was mentioning this from the Comptroller and Auditor General report, which was tabled in Parliament.

Raising the issue of Jammu and Kashmir, Azad told the House that government reports indicate that on a total 114 parameters related to education, health, education, sanitation and food, J-K's performance was better on 80 indicators than national average.

He said Gujarat scored better on 52 parameters than national average and if performance was the criteria then there are many states which need to reconstituted.

Azad appealed to the government to release all political leaders in the Valley. He claimed the bifurcation of the state has caused loss to industry, agriculture and employment.

"I hope that the government would admit its mistake and bring a fresh bill to make Jammu and Kashmir a state," he said.