CAA has no provision to take away citizenship: Shah

Union home minister Amit Shah  on Friday hit out at the opposition Congress, accusing the party of misleading people over the amended Citizenship Act. 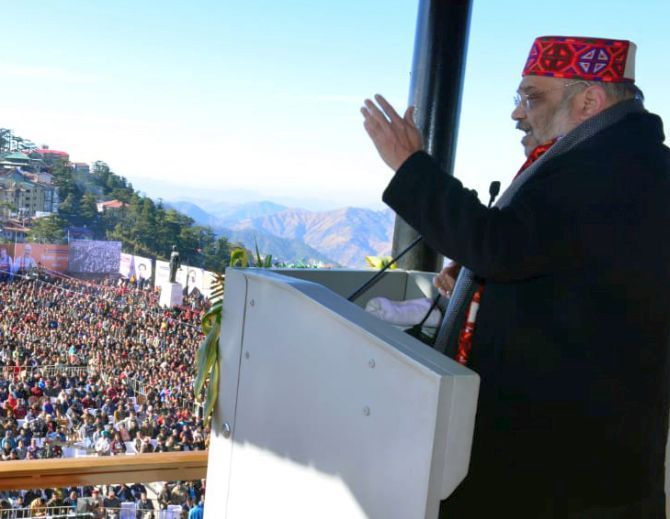 He also clarified that the legislation had no provision to take away citizenship.

"The Congress and company is spreading rumours that Muslims may lose their citizenship," said Shah during at rally at the historic Ridge Maidan in Shimla to mark the second anniversary of the Bharatiya Janata Party government in the state.

"I challenge Rahul Baba that let me know if there is even a single line in the Act regarding the withdrawal of anyone's citizenship. Don't misguide and divide people over the CAA," he added. Amit Shah said he wanted to ask the minorities, especially Muslims, to look into the CAA, which was now available on the government website.

"Go through the Act. No one will lose citizenship," he added.

The Union minister said the CAA would provide citizenship to the minorities who faced religious persecution in Pakistan, Bangladesh and Afghanistan.

Pakistan failed to implement the Nehru-Liaquat pact to protect religious and other rights of the minorities, Shah said, adding that it prompted the Narendra Modi-led BJP government to table the bill in Parliament which has now become a law.

The Union minister said the thinking of the world towards India had changed after the country carried out surgical strikes in Pakistan to end terrorism.

After the US and Israel, India had been added to the list of the countries that take action against infiltrators by entering the foreign soil, he added.

"Earlier, it was a challenge to hoist the national flag in Kashmir but now after the abrogation of Article 370, the fluttering of the Tricolour in the Valley is giving a message to the world," he said.

Claiming that the Narendra Modi-led NDA government at the Centre was working to end corruption, he said no opposition party could accuse the Union government of corruption in its six-year tenure.

Praising Jai Ram Thakur-led BJP government in Himachal Pradesh, Amit Shah said 88 per cent of the problems raised in Jan Manch programmes were solved on the spot during the two-year tenure of the state government.

He also congratulating the Thakur government for becoming the first state in the country "where every household had a gas connection".

BJP's national working president JP Nadda said the Modi government at the Centre had taken historical decisions in the past four to five months.

Speaking on the occasion, chief minister Jai Ram Thakur said since assuming office, his government worked for the development of every area and section of the state.

The victory of BJP on all four seats in the Lok Sabha elections by a record margin and thereafter in the two assembly bypolls vindicated the faith of people in policies and programmes of the state government, he added.

"First home minister Vallabhbhai Patel's image is reflected in present home minister as the nation has done away with Articles 370 and 35-A with Prime Minister Narendra Modi and Shah's active efforts," he said.

Later, Amit Shah attended the ground-breaking ceremony of projects worth over Rs 13,500 crores in Shimla.

The HP government had signed MoUs worth over Rs 93,000 crore during the two-day Himachal Rising Global Investors'' Meet at Dharamshala in November.