Counting of votes is underway on Sunday in three Lok Sabha and seven assembly seats spread across five states and Delhi where bypolls were held on June 23. 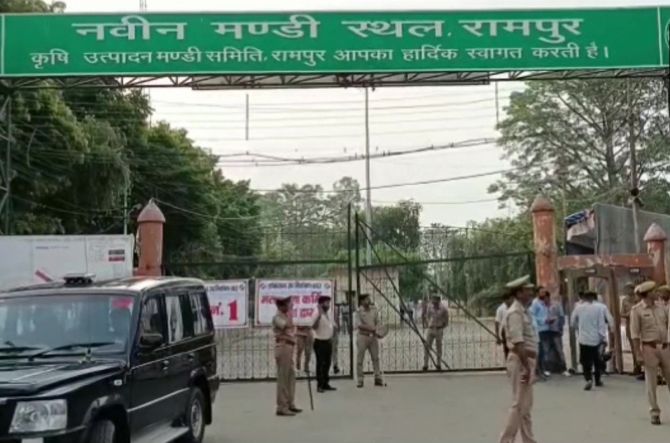 Counting began at 8 am under multi-tier security cover. At first, postal ballots will be counted and then EVMs opened.

Tripura Chief Minister Manik Saha is among the key candidates whose fate will be decided.

Tripura has the highest number of four seats -- Agartala, Jubarajnagar, Surma and Town Bardowali. Saha, who is contesting from Town Bardowali, needs to win this election to continue as chief minister.

Polling in Tripura on Thursday was the highest at 76.62 per cent.

Lok Sabha bypolls were held in Rampur and Azamgarh constituencies in Uttar Pradesh and Sangrur seat in Punjab.

The other constituencies where assembly bypolls were held were Rajinder Nagar in Delhi, Mandar in Jharkhand's Ranchi district and Atmakuru in Andhra Pradesh.

The bypolls in Uttar Pradesh were necessitated by resignations of Samajwadi Party chief Akhilesh Yadav and party leader Azam Khan from Azamgarh and Rampur seats, respectively.

Both leaders quit as Lok Sabha members following their election to the Uttar Pradesh legislative assembly in the elections held earlier this year.

In Sangrur, the bypoll was necessitated following the resignation of Chief Minister Bhagwant Mann from the Lok Sabha after he was elected as an MLA in the state assembly elections earlier this year.

Mann had won the Sangrur seat in the 2014 and 2019 parliamentary elections.

The ruling Aam Aadmi Party in Punjab is facing its first test of popularity after its impressive performance in the assembly polls.

The bypolls were held at a time when the AAP is facing opposition heat over the law-and-order scenario in the state and the killing of singer Sidhu Moosewala.

The by-election in Jharkhand was necessitated after the disqualification of Bandhu Tirkey as an MLA in the wake of his conviction in a corruption case.

A special CBI court in Jharkhand had on March 28 sentenced Tirkey to three years imprisonment.

The Congress has fielded his daughter, Shilpi Neha Tirkey, as the common candidate of the ruling Jharkhand Mukti Morcha-led coalition, while the BJP has nominated former legislator Gangotri Kujur in the seat. The Congress and the Rashtriya Janata Dal are the two other constituents of the ruling alliance in Jharkhand.

In Delhi's Rajinder Nagar, AAP's Durgesh Pathak is likely to have a close contest with BJP's Rajesh Bhatia, who had also been a councillor from the area.

The Congress' nominee is Prem Lata.

The bypoll was necessitated in the wake of AAP leader Raghav Chadha leaving the seat after being elected to the Rajya Sabha recently.

"We have made all the arrangements for the exercise. The strong room is fully secured with a three-tier security cover. The counting centre has been set up at ITI Pusa. Postal ballots will be counted first, and only those ballots which have been received from service voters till 8 am on June 26 will be considered for counting. After that the EVM votes shall be counted," a senior official had said in New Delhi on Saturday.

The by-election in Andhra Pradesh is being held to fill the vacancy caused due to the death of Industries Minister Mekapati Goutham Reddy in February. His younger brother Vikram Reddy is the ruling YSR Congress candidate and he is locked in a contest with BJP's G Bharat Kumar Yadav. 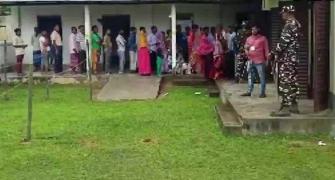 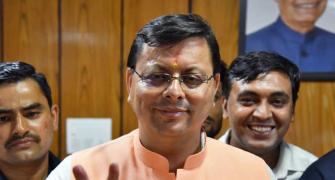 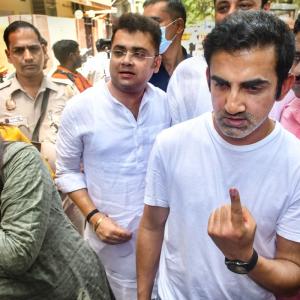 Bypolls: Voting lowest in Punjab, rigging claims in UP 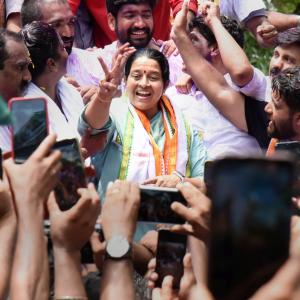