Buoyed by panchayat poll results, SP pushes to win UP back

'We have learnt lessons from Mamata Banerjee who overcame the BJP's canard by reciting Chandi Path and playing up her Brahmin origins in her campaign. We need to adopt strategies like asking Muslims to lie low and distributing tickets prudently so that we are not accused of favouring one community.' 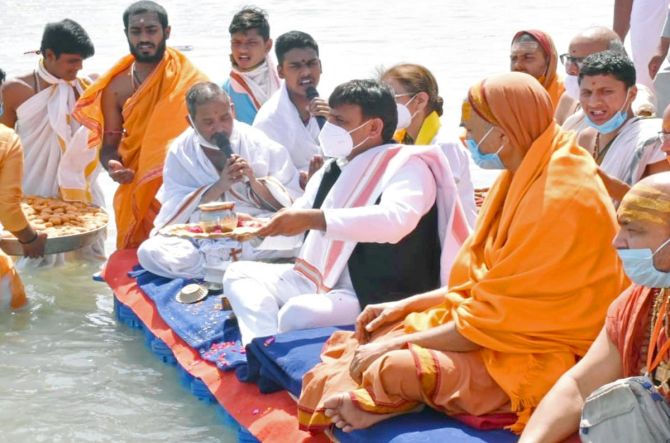 'Dobara Akhilesh (Akhilesh again)' is the catchphrase which the Samajwadi Party will use in its campaign for the 2022 Uttar Pradesh elections.

Only a few, if any, might have taken the tagline seriously some months ago, given that the SP was not visible on the ground to the extent a principal Opposition party should in the over four years of Yogi Adityanath's rule.

But after the SP acquitted itself fairly creditably in the recent panchayat polls, it emerged as the main challenger to the ruling Bharatiya Janata Party.

The three-layered polls to elect rural local bodies were held in four phases amid the raging pandemic that reportedly claimed the lives of over 700 school teachers on duty.

Although ballpark estimates are available on the results because the elections are not fought on party symbols, the SP claimed the party supported candidates on 1,500 of the 3,050 seats to elect district panchayat members, and more than 800 won.

Additionally, the SP backed 'free' candidates on seats that were contested by multiple persons from its rank-and-file, so that the party could eventually claim the victor as its own.

Despite the dispute between the SP and the BJP over the outcome, the SP defeated the BJP in its strongholds, such as Ayodhya, Varanasi, Lucknow and Gorakhpur.

SP president Akhilesh Yadav's reaction was: "The BJP has made a habit of making false promises which are never fulfilled. Now people have realised it and will vote for development (in 2022). The 'double-engine sarkar' stands exposed."

The SP's chief spokesperson Rajendra Chaudhary said: "The BJP has failed on all fronts. It let down every section -- farmers, youth, women, traders, and professionals."

However, given the grim pandemic situation, the state election commission deferred the next tiers of the polls.

"The BJP is too shocked and weak to indulge in the usual horse-trading. So, it had the polls postponed, using the Covid excuse," an SP source said.

Not just the elections, the SP's agenda to build political capital on its gains early on was thwarted by the pandemic that ravaged UP's villages the most in the current wave.

"We've asked our district and block workers to help out in whatever way they can, following the health protocol. Meal, medicines, financial aid -- these are the things that are done in practical terms. We are not promising what looks impossible like getting hospital beds," said Anand Bhadauriya, a legislative council member and a member of Yadav's core team.

Among the programmes the SP has in mind once physical mobility is possible is holding training camps for its workers.

"We are identifying young talent from the panchayat winners. This is the only nursery we have after the BJP government abolished student elections from where new leaders emerged," said Sanjay Lathar, a national executive member.

In the prelude to the rural body polls, the SP organised informal interactions called gheras with farmers, youth, and women -- some of which were addressed by Yadav.

"For instance, the sessions with farmers were meant to assess their views on the Centre's controversial reforms and see if only the rich farmers opposed the laws or whether the opposition was across the board," an SP source said.

It was important to get a measure of the dissent because when the Bharatiya Kisan Union (BKU) had its sit-in on the Delhi-UP border, the Jats from the western districts were at the forefront.

The BJP was optimistic that the non-Jats, comprising peasants from the other backward classes (OBC) who easily outnumber the Jats, were not part of the agitation.

"Out information is otherwise. The OBCs may not have joined the dharna but they are as against the reforms as the Jats," the source claimed.

In the west, the SP has an alliance with Jayant Chaudhary's Rashtriya Lok Dal which joined the BKU-led protests and fared well in the panchayat polls.

Realising that the SP's core base of Yadavs and Muslims is not enough to challenge the social coalition of the upper castes, OBCs and sections of Dalits that the BJP cemented since 2014, Yadav is going beyond the formula to seek out partnerships with parties wedded to identity politics in the east and central parts.

His present and prospective allies include the Mahan Dal -- it held a joint farmers' mahapanchayat at Kasganj, a BJP fief, on March 13 -- and the Janwadi Party which represents the Chauhan and Noonia OBC sub-castes.

While the SP is closely watching the moves of Asaduddin Owaisi's All India Majlis-e-Ittehadul Muslimeen which tied up with the Suheldev Bharatiya Samaj Party, a former BJP ally, party sources admitted their biggest problem remained navigating the tricky 'Hindutva' terrain which the BJP monopolises.

"It's our biggest challenge after the BJP labelled us a pro-Muslim party. We have learnt lessons from Mamata Banerjee who overcame the BJP's canard by reciting Chandi Path and playing up her Brahmin origins in her campaign.

"We need to adopt strategies like asking Muslims to lie low and distributing tickets prudently so that we are not accused of favouring one community," an SP leader said.

The SP will underpin its campaign on 'development'.

"Hospitals will be our symbol because that will resonate with people in the present conditions. In his four years, Babaji (Adityanath) has not built a single hospital or primary health centre or bought even one ambulance or recruited doctors and paramedics.

"The health infrastructure that helps people today was created by our leader," contended Sunny Yadav, an SP office-bearer.