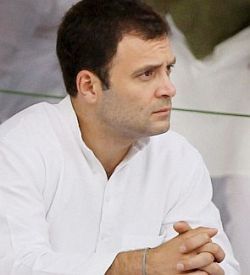 The Congress vice-president stressed on the unity of his party in the faction-ridden state unit and expressed confidence that it will form the next government in Madhya Pradesh, which will "not belong to a leader" but to the poor, youths and women.

Gandhi, who has been focusing on the Bundelkhand region for quite some time and had also been instrumental in getting a financial package for the area, said farmers wanted to know where did the money sent by the Centre to dig wells go.

Interacting with the crowds gathered to hear him, Gandhi asked them whether they had felt any impact of the "India Shining politics".

In a speech laced with anecdotes like dreams of a "sweating farmer" engaged in agricultural work that his sons or grandsons would some day fly in aeroplanes, to that of village women and youths, Gandhi briefly mentioned Indira Gandhi and said in contrast to BJP's politics of only development, Congress politics takes into account both things -- development as well empowering people.

Seeking to add a personal touch to his associating with people in Bundelkhand, Gandhi recalled that when he had first come to the region, he had suffered mosquito bites and when he had consumed water in a village, it had got his stomach upset.

"But I was happy. Politicians should know the hardships faced by people," he said.

BJP-led NDA had given slogan of 'India Shining' during 2004 Lok Sabha elections, which saw the UPA coming to power, bringing to an end the NDA rule at the Centre.