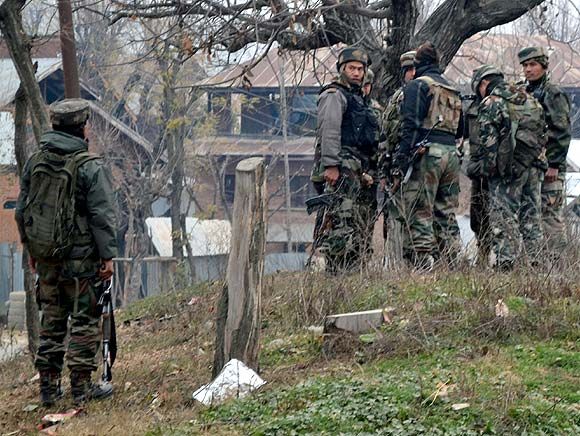 The bullet-ridden body of an Army jawan was recovered from Pulwama district hours after he was abducted by terrorists on his way home for Eid celebrations, police said on Thursday.

Aurangzeb, who was 'buddy' of a company commander, was abducted by terrorists at Kalampora in Pulwama on Thursday morning when he was on his way home in Rajouri district for Eid celebrations.

His body was found by a team of police and Army at Gussu village, about 10 km away from Kalampora, in Pulwama district.

He was shot in his head and neck, police said.

Aurangzeb belonged to 4 Jammu and Kashmir Light Infantry and was posted at the 44 Rashtriya Rifles camp at Shadimarg in Shopian, they said.

At about 9 am, Army men from the unit stopped a car asking the driver to drop Aurangzeb in Shopian, officials said, recounting what had happened.

Terrorists stopped the vehicle as it approached Kalampora and abducted the jawan.

During the day, veteran journalist and Rising Kashmir editor Shujaat Bukhari and his two personal security officers were shot dead by terrorists outside the newspaper's office in the heart of Srinagar.

The body of a soldier, who went missing after a landslide in Jammu and Kashmir's Kupwara district last year, has been found after six months, an Army officer said on Thursday.

Sepoy Shammi Singh, 26, had gone missing on December 11, 2017, in the Kupwara district and his body was recovered on Wednesday, the officer said.

Singh was part of an operational team which was serving in the formidable heights along the Line of Control and was swept away in a landslide during patrolling, he added.

Two bodies had been recovered earlier, while Singh remained missing, the officer said.

He said the search operations resumed after the snow melted and concluded on Wednesday with the recovery of Singh's body.

The Army paid floral tributes to Singh at the Badami Bagh cantonment here. Chief of Staff of Chinar Corps, Lt Gen S K Sharma and other personnel attended the ceremony.

Singh's mortal remains were flown to his native Makroli village in Himachal Pradesh's Kangra district, where he will be laid to rest with full military honours, the officer said.

In this hour of grief, the Army stands with the martyr's bereaved family, he added.

Singh had joined the Army in 2012 and is survived by his parents.