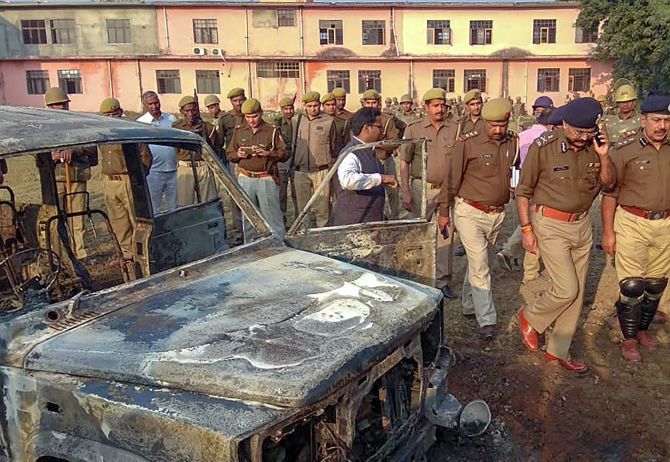 An Uttar Pradesh police team was sent to Jammu to arrest an Army jawan allegedly involved in the murder of a police inspector during the Bulandshahr violence, and five more people were nabbed in the case, taking the total number of arrests to nine, officials said on Friday.

Sedition is one of the 17 charges in the first information report in which 27 people have been named besides 50-60 unidentified people.

They were allegedly involved in the violence that led to the killing of Inspector Subodh Singh and Sumit Kumar, 20.

In a letter sent to Bulandshahr MP Bhola Singh, they alleged that his behaviour caused resentment in the Hindu community.

The letter was forwarded by the MP to Bulandshahr SSP K B Singh demanding a probe against him.

On Friday, the SSP confirmed to PTI that he had received such a letter from Bhola Singh.

When asked what action was taken over it, he said probe orders were given.

The violence was triggered after cattle carcasses were found in nearby fields.

Jeetu alias Fauji of Mahav village is a named accused in the case, Inspector General (Crime) S K Bhagat told reporters in Lucknow when asked about his alleged involvement in the mob violence.

Jeetu's actual name is Jeetendra Malik and he is the 11th suspect named in the FIR lodged at Siyana police station on December 4.

According to preliminary information, he is posted in Jammu and a police team has been sent there, Bhagat said.

"We hope that he will be arrested soon," the IG said, adding the Special Investigation Team (SIT) formed to probe the case would be able to ascertain his actual role.

Army sources in New Delhi confirmed that the police have contacted the Northern Command and they are cooperating in the probe.

The five people arrested were identified as Chandra, Rohit, Sonu, Nitin and Jitendra but their names were not mentioned in the FIR lodged for the murder of the Syana SHO, Bhagat said.

They were nabbed on the basis of video footage and eyewitness accounts, he said. Police teams were conducting raids to make more arrests, the IG said.

The IG said that the confidential report of an inquiry conducted by ADG Intelligence S B Shirodkar has been handed over to senior officials.

The cattle carcasses were found outside Mahav village strewn in the fields of former village head Rajpal Chaudhary, who too has been named in the FIR along with five more men from the village. All of them are absconding.

Sources that PTI spoke to in the village revealed that Jeetu had come to the village on leave and was 'present at the site of violence' but left soon after the incident on Monday afternoon.

His elder brother is also in the Army.

"Both of my sons are in the Army. They are not here, they on duty," his mother Ratan Kaur told PTI, adding the police had raided her house around 1 am on Tuesday, assaulted her daughter-in-law, vandalised the house and picked up her husband Rajpal Singh.

The 60-year-old woman said she was away in Pipala village at the house of her elder daughter-in law as her family had suffered a bereavement recently. She said she returned home only on Wednesday.

Speaking to a TV news channel, she Friday said, "Jeetu is in Kargil and if any evidence like a picture or a video emerges showing he killed the policeman then I will kill him myself. I'm not so heartless, I'm equally pained by the death of the policeman and the other boy from Chingrawathi and also for what the entire village and its people are going through."

"I was at home with my father-in-law and my three- month-old baby when the police came to our house. They assaulted me so badly that my hand got fractured and I suffered an injury in one ear," she told PTI over phone from a hospital in Meerut.

Sumit Kumar, from Chingrawathi village, who died in the clash is among those named in the FIR which also accuses Bajrang Dal's Bulandshahr unit convenor Yogesh Raj, local BJP worker Shikhar Agarwal among others of instigating violence.

According to the FIR, the suspects were booked on the charges of mischief by fire or explosive substance, murder, attempt to murder, sedition, rioting, voluntary assault on public servant to obstruct them from performing their duty and endangering life or personal safety of others.

They have also been booked for destroying public property, among others.