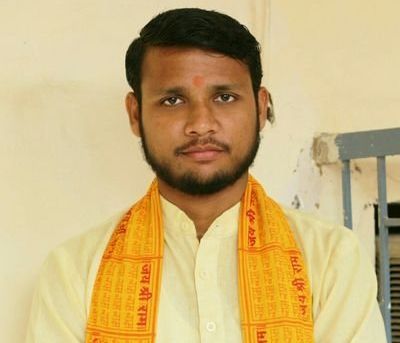 A Bajrang Dal leader absconding after mob violence over alleged cow slaughter which killed a police inspector and a youth in Bulandshahr surfaced in a video clip on Wednesday, claiming innocence.

The western Uttar Pradesh unit of the right-wing organisation has also claimed that its Bulandshahr convenor Yogesh Raj was not involved in the violence, but said he should surrender.

The Bajrang Dal suggested that the probe should be conducted by the Central Bureau of Investigation, and not the state police.

The police, who arrested four people after Monday's violence, reported no further arrests till the evening on Wednesday.

With lakhs of people collected for a 'Tabligi Ijtema', a congregation of Muslims, 40 km from Mahaw village where the cattle carcasses were found, police also succeeded in containing what could have been a communal riot, he told PTI.

Security was visibly reduced but tension persisted in Chingrawathi, Mahaw and Naya Bans villages of Bulandshahr's Siyana tehsil on Wednesday.

Many people kept away from their homes, fearing arrest in connection with the two first information reports registered by police -- one over the alleged cow slaughter and the other for the violence that followed.

No classes were held in schools in the area where a mob torched a police post and attacked policemen on Monday after some carcasses were found in a field.

Inspector Subodh Kumar Singh, who had initially probed the 2015 lynching of Mohammed Akhlaq in Dadri, and 20-year-old Sumit Kumar died of gunshot injuries in the attack.

Bajrang Dal's western Uttar Pradesh region co-convenor Praveen Bhati claimed Yogesh Raj had nothing to do with the violence.

"He will cooperate with the police and come out at the right time," Bhati said.

"Certainly he should surrender, but I should also make it clear that the probe should be conducted by a bigger agency for the truth to be revealed,” he said, suggesting that the CBI should take over.

In the video, the man identifying himself as Yogesh Raj said when he heard about a ‘cow slaughter’ at Mahaw village, he went there with his supporters.

“The police also reached there and we went to the Siyana police station for filing our complaint (about the carcasses)," he said.

Raj said that while he and his supporters were still at the police station they got to know that villagers were pelting stones.

“I have nothing to do with it. I have full faith in God. I will be cleared of all accusations," he said.

The Uttar Pradesh Provincial Armed Constabulary and the state's Rapid Action Force deployed in the area around the violence site have pulled out.

But a large number of UP police personnel stayed put around Chingrawathi police post, and along the Bulandshahr-Garhmukteshwar highway.

"Yes the security has been lowered but the residents are still terrified," Chingrawathi village head Ajay Kumar told PTI.

"Several people have left fearing their names would be dragged in the case. There are 50 to 60 unidentified persons in the FIR and that is the cause of worry for the people here," he said.

No students turned up for classes at the government primary and junior secondary schools outside Chingrawathi village Wednesday, teachers said.

The wife and sister-in-law of Rajkumar Chaudhary, a former Mahaw village head and one of the 27 named accused in the FIR, alleged vandalism and assault by the police.

The carcasses were found on his fields and he and some others from the village are absconding.

The villagers claimed people that the Bajrang Dal came to the spot from outside and insisted on taking the carcasses to the police post. But the police visited their village, they said.

"Around 1 am on December 4, 14-15 policemen forcibly entered our house and vandalised everything. There was no woman police official with them," Chaudhary's sister-in-law Beena Devi said.

His wife Preeti claimed the police damaged their car, broke windows of the house and assaulted her.

"One of the policeman wearing a black jacket hurled abuses at me. One of them hit me on my right leg with a baton and the skin on that part has turned black around my knee," she claimed.

Priyanka, 24, whose husband Jitendra Malik has been named in the FIR, also accused the police of assaulting her.

"I was at home with my father-in-law and three-month-old baby when the police came to our house. They assaulted me so badly that my hand got fractured and one ear also got badly injured," she told PTI over the phone from a hospital in Meerut.

People in Naya Bans where seven of the accused in the cow slaughter case live, according to the FIR, said there is tension in the village. 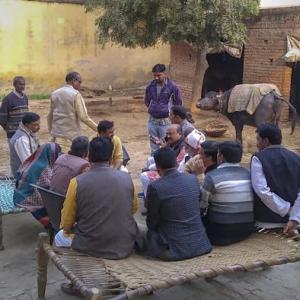