BSF finds tunnels used by terrorists for infiltration into J-K

A 150-metre tunnel constructed along the International Border (IB) to facilitate infiltration of terrorists into Jammu and Kashmir from Pakistan was detected by Border Security Force (BSF) personnel in Hiranagar sector of Kathua district on Wednesday, officials said. 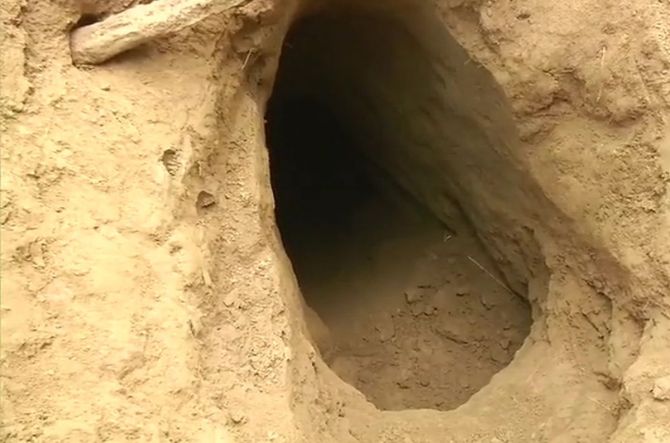 This is the third tunnel unearthed by alert border guards along the IB in the twin districts of Samba and Kathua in Jammu region over the past six months and ninth in the past decade.

"A nearly 150-metre-long tunnel was detected by a BSF patrol party during an anti-tunnelling operation in Bobiyaan village of Hirnagar sector this morning," Inspector General of BSF, Jammu frontier, N S Jamwal told reporters at the scene.

He along with other senior officers rushed to Bobiyaan soon after the detection of the tunnel.

"The opposite of this side is Pakistan's Shakergarh which is notorious for having launch pads and bases of terrorists. We have inputs available with us as a result of that we are sensitive to whatever is happening here," the BSF officer said, assuring that all necessary measures are in place to counter Pakistani designs.

He said sand bags with Pakistani markings are evidence of the hand of Pakistani establishment in the construction of this tunnel, which is identical to the previously detected tunnels having a depth of 25 to 30 metre with two to three feet diameter.

Asked whether this tunnel was recently dug or it's an old one, the BSF officer said it is a matter of investigation.

However, he said some of the sand bags recovered from the tunnel have 2016-17 year of manufacture which suggest that it is an old tunnel.

"We were searching for this tunnel for a long time and its detection was the effort of the anti-tunnelling operation which is underway all along the IB.

"Whether any infiltration had taken place through this tunnel in the past can be said after completion of our investigation," he said. 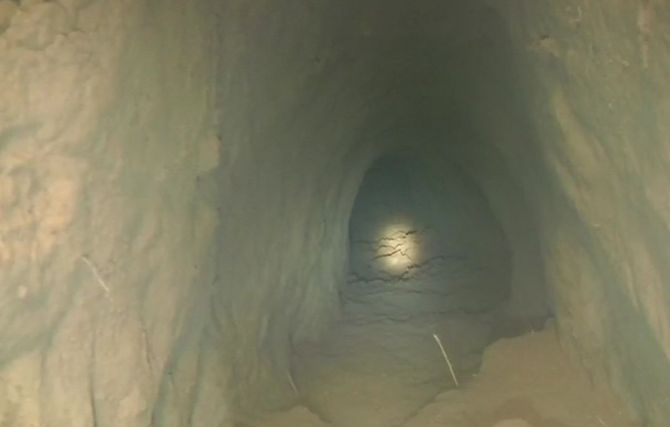 Jamwal, however, said the BSF is sure that no infiltration had taken place through this tunnel in the recent past.

"We are undertaking some development works here and have strengthened the security in view of the anti-tunnelling drive," he said.

Referring to the killing of two Pakistani infiltrators in Surankote area of Poonch district and an encounter in Srinagar last month, the IG said Pakistan is always looking for an opportunity to push terrorists into Jammu Kashmir, whether it is through Line of Control (LoC) or IB.

"They are continuing with the attempts but we are fully alert to the situation. Our alertness resulted in detection of underground tunnels and shooting down of a Hexa-copter loaded with a huge cache of arms and ammunition," he said, adding the border protection grid comprising army, BSF and police are working jointly to scuttle Pakistan's attempts to push terrorists and weapons into this side.

Last year, the BSF detected two such tunnels in Samba district on August 28 and November 22 following successful infiltration by two groups of terrorists who were subsequently neutralised in separate encounters along Jammu-Srinagar national highway while they were enroute to Kashmir in trucks.

While three Pakistani terrorists affiliated with Jaish-e-Mohammad (JeM) were eliminated in a gunfight in Nagrota area near Jammu after they were intercepted aboard a Kashmir-bound truck in January last year, another group of Pakistani terrorists armed with weapons and a large quantity of grenades were killed at the same spot on November 19.

Investigations suggested both the groups infiltrated into this side through underground tunnels.

Meanwhile, Pakistani Rangers violated ceasefire by resorting to unprovoked firing on forward posts and villages in the Border Outpost area of Gurnam in Hiranagar sector, the officials said.

The firing from across the border started around 10 pm Tuesday, prompting strong and effective retaliation by the BSF, they said, adding the cross-border firing between the two sides continued till 2.25 am Wednesday but there was no report of any damage on Indian side.