A Pakistani-origin controversial British peer Lord Nazir Ahmed has been suspended by his Labour Party over reports that he offered 10 million Pound bounty for the capture of US President Barack Obama and his predecessor George Bush.

Ahmed, 53, who in 1998 became the first Muslim life peer was reported to have made the comments at a conference in Haripur in northwest Pakistan, Daily Telegraph reported.

The Pakistani Express Tribune said that Ahmed put up the bounty in retaliation of the US reward for the capture of LeT founder Hafiz Saeed.

Saeed is wanted for the 2008 Mumbai terror attacks in which 166 people were killed.

The British peer reportedly said: "'If the US can announce a reward of $10 million for the (capture) of Hafiz Saeed, I can announce a bounty of 10 million Pound (for the capture of) President Obama and his predecessor, George Bush," the Telegraph said.

A Labour Party spokesman said, "We have suspended Lord Ahmed pending investigation. If these comments are accurate, we utterly condemn these remarks which are totally unacceptable."

The peer called the US bounty as an "insult to all Muslims".
Source: PTI© Copyright 2021 PTI. All rights reserved. Republication or redistribution of PTI content, including by framing or similar means, is expressly prohibited without the prior written consent.
Related News: Barack Obama, Nazir Ahmed, George Bush, Hafiz Saeed, Labour Party
Print this article 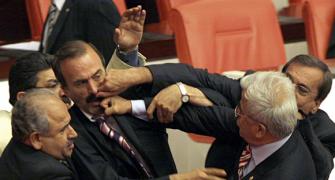 DHISHUM! When parliaments turned to battlefields
What to expect from the Seoul Nuclear Security Summit
Pak must hand over Saeed to improve ties: BJP