The Philippines, confronted with Chinese bullying in the South China Sea, have become the first foreign military to order the shore-based, anti-ship cruise missile. The signing of a $375 million contract with the Philippines for the supply of 24-30 BrahMos cruise missiles in the anti-ship configuration constitutes India's largest-ever weapons sale abroad.

'BrahMos Aerospace Private Limited (BAPL) signed a contract with the Department of National Defence of the Republic of Philippines on January 28 for supply of Shore-Based Anti-Ship Missile System to [the] Philippines, the defence ministry announced on January 28.

The Philippines have contracted for 24-30 BrahMos missiles, along with surveillance-cum-guidance radars, launcher vehicles, command and control centres, and replenishment vehicles.

BrahMos Aerospace has undertaken to supply the entire order within three-and-a-half years.

With India's military demonstrating its confidence in the BrahMos, several foreign armed forces made enquiries about the weapon.

Now the Philippines, confronted with Chinese bullying in the South China Sea, have become the first foreign military to actually order the shore-based, anti-ship cruise missile.

In a hypothetical armed confrontation that involves warships of the People's Liberation Army (Navy), or PLA(N), attacking the Philippines, the Chinese flotilla would be detected at ranges beyond 500 km by the surveillance-and-guidance radar of the BrahMos battery.

It would alert the battery command post, which would automatically designate the most suitable launcher vehicles to take on specific targets.

As the aggressor missile closed in, the command post would give the launch command at an appropriate moment. BAPL has undertaken to indigenise the equipment it will supply the Philippines to a level of about 70 per cent.

However, company insiders point out that it will be a challenge to achieve this level within the 42-month period in which supply is to be completed.

BAPL has fought hard for this contract, with its chief, Sudhir Mishra, who retired in November, travelling to the Philippines several times during the pandemic.

"Exporting the BrahMos to the Philippines constitutes India's first-ever weapons sale. I am sure this will set a precedent for others to follow so that we can achieve the defence minister's export target of $5 billion per year," said Mishra.

The BAPL JV was established in February 1998 through an inter-government agreement between New Delhi and Moscow, with the stated aim of designing, developing, producing and marketing the BrahMos supersonic cruise missile.

The name BrahMos was given in honour of the Brahmaputra river in India and the Moscow river in Russia. BAPL's share capital of $250 million has been contributed by India and Russia in the ratio of 50.5 per cent and 49.5 per cent, respectively.

The share capital was subsequently enhanced by $50 million to cater for developing the aircraft-launched version of the missile.

Public and private industries from India and Russia were carefully chosen to be a part of the BrahMos consortium.

The first launch of the BrahMos took place in 2001. It was witnessed by then defence minister Jaswant Singh.

The Indian Navy, which has always supported indigenisation, was the first service to come forward.

They offered the destroyer, the INS Rajput, to be modified to carry the BrahMos. In 2003, the BrahMos' third flight was from the ship.

Not yet satisfied, the navy asked for the BrahMos' capability to be proven by real-life firing at a derelict ship.

A 'combat mission' was ordered with the target being a derelict ship.

It was sunk in minutes and the navy became a strong votary of the anti-ship version of the BrahMos.

All Indian Navy warships currently being built are being kitted to carry 8-16 BrahMos missiles each in vertical canisters. 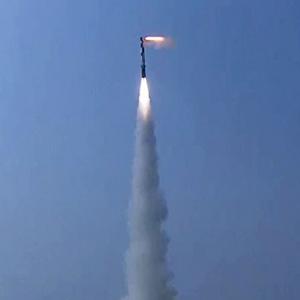