The bonhomie between Prime Minister Narendra Modi and his British counterpart Prime Minister Boris Johnson was palpable at a media event here on Friday with the United Kingdom PM referring to Modi as 'khaas dost (special friend)' and calling him by his first name multiple times. 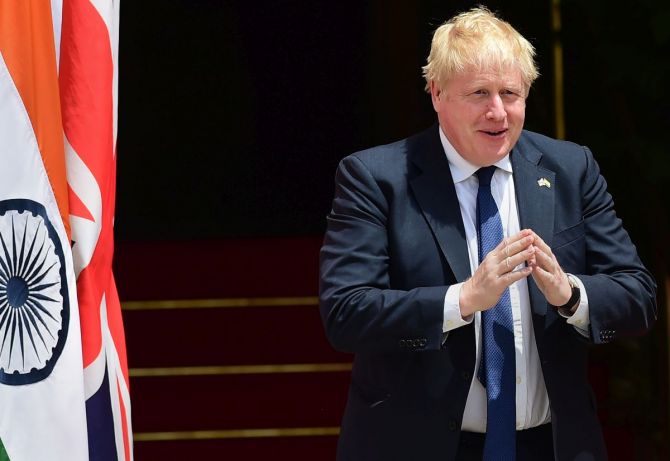 Johnson also appreciated the welcome he received in India, especially in Gujarat, saying he felt a bit like Sachin Tendulkar and his face was ubiquitous like Amitabh Bachchan.

Addressing a joint press event with Modi, "Thank you my friend Narendra, my Khaas dost is the phrase I would (like to) use in Hindi. We have had a fantastic two days here in India."

"Yesterday, I became the first conservative prime minister to visit Gujarat, which is your birth place of course Narendra, but as you just said the ancestral home of about half of all the British Indians and I had an amazing reception, absolutely amazing, I felt a bit like Sachin Tendulkar and my face was ubiquitous everywhere as Amitabh Bachchan. I was everywhere to be seen and it was fantastic," Johnson said.

"This morning we have had wonderful talks and they have strengthened our relationship every way," he said.

Johnson said in challenging times it is important that we, the 'khaas dost', get closer together.

"I believe the partnership between the UK and India, one of the oldest democracies and the largest democracies, is certainly the most defining of our times," he said.

Johnson arrived in Ahmedabad on Thursday as part of his two-day India trip and visited the famous Sabarmati Ashram and met industrialist Gautam Adani.

In the backdrop of the rapid geopolitical turmoil, Prime Minister Modi and his British counterpart Johnson agreed on a new and expanded India-UK defence partnership and vowed to seal an ambitious free trade agreement by the end of the year.