After the big blow of losing his chancellor Rishi Sunak and health secretary Sajid Javid in quick succession, a flurry of junior ministerial and government aide resignations hit embattled British Prime Minister Boris Johnson on Wednesday as he fought the latest challenge to his leadership. 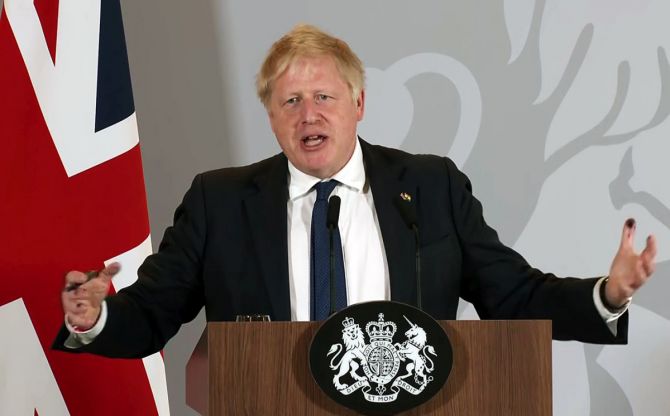 Will Quince, who was sent out to defend No. 10 Downing Street's appointment of Chris Pincher as deputy chief whip just hours before Johnson admitted his mistake in appointing him to a government job, resigned as an education minister.

Soon after, Robin Walker resigned as the schools' minister, warning against a "worrying narrowing of the broad church that I believe any Conservative government should seek to achieve".

It came as Tory MP Laura Trott quit as a ministerial aide at the transport department saying the government has lost trust, adding to a growing number of aides who have similarly stepped down.

However, Johnson, 58, has so far seemed defiant to fight on, moving swiftly to fill the top jobs with Iraqi immigrant minister Nadhim Zahawi stepping in as UK chancellor of the exchequer and Steve Barclay as health secretary.

Under current rules Johnson is safe from another leadership challenge until next summer. But the executive of the 1922 committee can change the rules whenever it wants, the British media reports said.

"The team in government today is the team that will deliver," said Zahawi, in his first set of interviews in the new post.

He urged his Cabinet colleagues to unite behind Johnson, saying: ”This is a team game, and you play for the team, and you deliver for the team."

Johnson will face his backbenchers and Opposition MPs in the House of Commons later at Prime Minister's Questions (PMQs), before he is grilled by Parliament's liaison committee on topics including integrity in politics.

It follows his apology on Tuesday, after days of changing messages from Downing Street over the hiring and handling of the now-suspended Pincher, who quit last week after being accused of groping two men in a private member's club in London. First to announce his departure was Javid, who in his damning resignation letter said he could "no longer, in good conscience, continue serving in this government".

But Johnson's allies have spoken out in his favour, with Culture Secretary Nadine Dorries saying the prime minister "consistently gets all the big decisions right", while Brexit Opportunities Minister Jacob Rees-Mogg said his victory at the 2019 general election "should not be taken away from him because a number of people resign".

For months Prime Minister Johnson has been facing a barrage of criticism and rebellion over his conduct and that of his government, including illegal, Covid-linked lockdown-breaking parties at his Downing Street offices for which he and others were fined by the police.

Last month, Johnson survived a confidence vote, but the final count of his lawmakers who rebelled against him was higher than his supporters expected: 41 per cent of his own Conservative parliamentary party refused to back him.