Johnson cancels R-Day visit due to Covid crisis in UK

British Prime Minister Boris Johnson, who was scheduled to attend the Republic Day celebrations in India as Chief Guest, has cancelled his visit to the country later this month due to the growing health crisis created by the new variant of coronavirus in the United Kingdom. 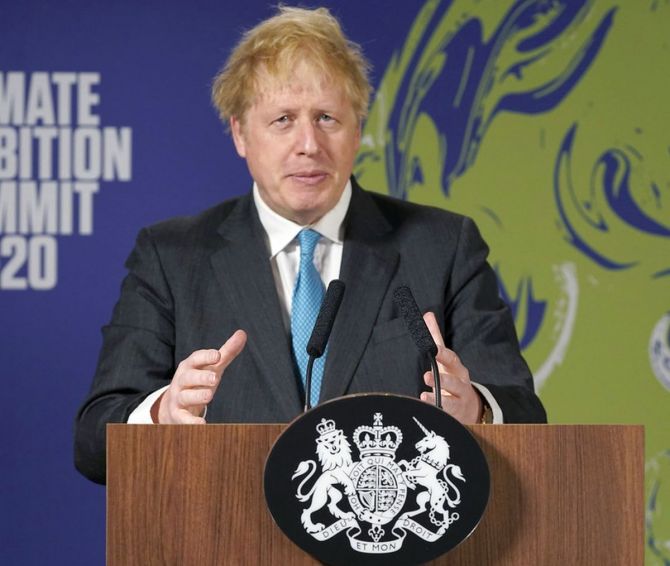 "Prime Minister Narendra Modi had a telephonic conversation today with Johnson. Prime Minister Johnson reiterated his thanks for India's invitation for him as the Chief Guest of the forthcoming Republic Day celebrations, but regretted his inability to attend in view of the changed COVID-19 context prevailing in the UK. He reiterated his keenness to visit India in the near future," a release from the Prime Minister's office in New Delhi said.

Johnson's call with Modi came a day after he addressed the nation to announce a new stay-at-home lockdown in the UK as his medical chiefs warned that the National Health Service was under threat of being overwhelmed by the rising infection rates.

"Prime Minister (Modi) expressed his understanding of the exceptional situation in the UK, and conveyed his best wishes for the quick control of the pandemic spread. He looked forward to receiving Prime Minister Johnson in India at the earliest opportunity after normalisation of the situation," the PMO said.

In London, a Downing Street spokesperson said, “In light of the national lockdown announced last night, and the speed at which the new coronavirus variant is spreading, the Prime Minister said that it was important for him to remain in the UK so he can focus on the domestic response to the virus."

Last month, Johnson had written to Modi to formally accept his invitation to visit India as Chief Guest at the Republic Day Parade, which was to mark his first major bilateral visit since taking office in 2019 and the first since Britain's formal exit from the European Union at the end of the Brexit transition period on December 31, 2020.

"I am absolutely delighted to be visiting India next year at the start of an exciting year for Global Britain, and look forward to delivering the quantum leap in our bilateral relationship that Prime Minister Modi and I have pledged to achieve," Johnson had said.

"As a key player in the Indo-Pacific region, India is an increasingly indispensable partner for the United Kingdom as we work to boost jobs and growth, confront shared threats to our security and protect our planet," he said.

According to the spokesperson, Johnson said he hopes to visit India in the first half of 2021, and ahead of the UK's G7 Summit that Prime Minister Modi is due to attend as a guest.

While accepting Modi's invitation, Johnson had extended an invite to the Indian Prime Minister to attend the UK's G7 Summit as one of three guest nations alongside South Korea and Australia with a focus on his declared ambition to work with a group of like-minded democracies to advance shared interests and tackle common challenges.

During the call on Tuesday, the two leaders reviewed the ongoing cooperation between both countries, including in the area of making COVID-19 vaccines available for the world, the PMO said.

They reiterated their shared belief in the potential of the India-UK partnership in the post-BREXIT, post-COVID context, and agreed to work towards a comprehensive roadmap for realising this potential, it said.

The two leaders underlined their "shared commitment" to the bilateral relationship, and to continue to build on the close collaboration between India and the UK including in response to the pandemic.

The coronavirus infection has been raging in the UK for some time owing to a large extent to a new mutant of the virus, which has been found to be more infectious.

England has entered a new lockdown similar to the one in March, with orders to work from home and closure of schools, pubs and restaurants.

According to the latest data, in England alone, the number of COVID-19 patients in hospitals has increased by nearly a third in the last week, to almost 27,000. That number is 40 per cent higher than the first peak of the pandemic in April.

On December 29, more than 80,000 people tested positive for COVID across the UK - a new record - and the number of deaths is up by 20 per cent over the last week.