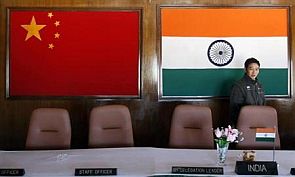 The Sino-Indian border row over Chinese incursion in Ladakh may cast a shadow on the proposed visit of new Chinese Premier Li Keqiang to India, specially his desire to make New Delhi the first stop to send a message of Beijing's desire to improve relations, analysts in Beijing said.

Choosing India as the first stop of the premier's visit shows China's will to improve bilateral ties, but the current standoff may cast a shadow on the tour, said Han Hua, Director of the Centre for Arms Control and Disarmament at the School of International Studies under Peking University.

While there is no official announcement, officials say Li has expressed wish to make New Delhi first halt of his maiden foreign tour and it is expected to take place in May.

Ahead of that, External Affairs Minister Salman Khurshid would visit Beijing on May 9.

"Reports about Chinese troops' cross-border patrols are not rare in Indian media. However, the latest hyping came at an inappropriate time before the premier's visit, and it was also inappropriate to summon the ambassador," Han told state-run Global Times.

He spoke about speculation that India may hope to "fish in troubled waters" as China is caught in an island dispute with Japan.

Zhang Yongpan, a scholar with the Research Centre for Chinese Borderland History and Geography at the Chinese Academy of Social Sciences, said the standoff took place in the western section of the border between China and India.

"The disputed region in Aksai Chin occupies an area of about 20,000 square kilometers," he said.

According to Zhang, compared with the eastern section of the disputed border, Aksai Chin, which is at high altitude and scarcely populated, is less disputed, because it doesn't have many natural resources.

The border dispute is an issue left over from the history of Western colonialism, and both China and India are victims, Dong Manyuan, a researcher at the China Institute of International Studies, told state-run China Daily.

As both countries face the task of developing their own economies and keeping their rapid growth, border issues should not get in the way, he said.

"But we cannot expect the disputes to be solved overnight. We need to have patience on that," Dong said.

Narrowing differences through peaceful negotiations is the right method, and China's previous experience with solving border disputes with other countries has proved that, he said.