With sulking Tourism Minister Anand Singh shutting down his MLA’s office in Hospet in Vijayanagar district reportedly to show his displeasure over the portfolio allocation, Chief Minister Basavaraj S Bommai on Wednesday said he would speak to him. 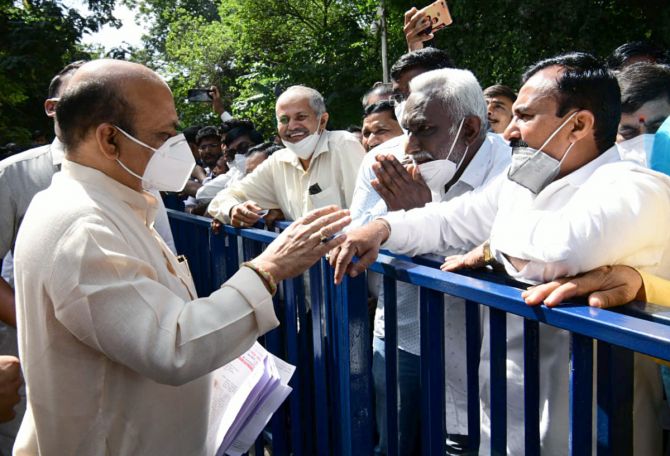 "Me and Anand Singh are friends for three decades. We are continuously in touch. Yesterday I spoke to him. Today also I will speak to him. I am aware of his views and I too have conveyed my views. Everything will be set right after he comes and speaks to me," Bommai told reporters in Bengaluru.

Sources close to the minister said he was keen on getting the forest department which he held in the previous B S Yediyurappa government, along with the energy portfolio.

"Against his wish, he was given tourism, ecology and environment portfolio," they added.

When asked whether Singh has tendered his resignation when he met him recently, Bommai said, "We only had a conversation. He has not done so (resigning)."

He also exuded confidence that everything will be fine "towards the end".

Bommai acknowledged that Singh has explained to him all the issues involved and would discuss with him again. "Again I have to speak to him. I am calling him for discussion. Everything will be fine," the chief minister said.

About the possibility of changing his portfolio, Bommai wondered how can he tell the media what he was going to do.

When he was told about Singh's purported statement that he will not "bow down", Bommai said Singh may say anything but he will have to speak to him and take a decision accordingly.

"I have asked him (Anand Singh) to come today; tomorrow I will not be available or he can come day-after-tomorrow. Let him come according to his convenience," the chief minister said.

Bommai also denied having spoken to the party central leadership on the issue.

Regarding another sulking minister, N Nagaraj (MTB), Bommai said he has spoken to him and there was no problem with him.

After Yediyurappa resigned on July 26 coinciding with his two years in office, Bommai succeeded him as chief minister on July 28 and on August 4, he expanded his cabinet with 29 ministers. He retained most of the ministers in Yediyurappa’s government barring a few who were dropped, including senior BJP MLA S Suresh Kumar.

Meanwhile, minister V Sunil Kumar, who was allocated energy, Kannada and culture department has not yet taken charge of the energy portfolio.

When reporters told him that Anand Singh has been "adamant" on getting the energy portfolio and has reportedly contemplated resigning, Kumar said, "I don't know about other issues. Ask me only about the Kannada and culture portfolio. I have taken charge of the Kannada and culture portfolio today. I will take charge of the energy department after three days."

Nagaraj, who had accepted the decision of the chief minister, told reporters on Wednesday that Bommai had promised to change his portfolio and he has faith in him.

Barely a fortnight after Bommai took over as CM, dissidence seems to be growing among a section of BJP MLAs and ministers over the cabinet expansion.

Meanwhile, Anand Singh visited an ancient temple and performed special prayers. Sources close to him said that he had performed a similar puja when he decided to resign from the Karnataka assembly as Congress MLA two years ago to join the BJP.

He was among the 17 Congress and Janata Dal-Secular MLAs who were disqualified. Later, 16 of them joined the BJP and all of them became legislators. A majority of them became ministers too.