"Bold", "historic" and "monumental" -- this is how Bharatiya Janata Party leaders described on Monday the government's decision to revoke Article 370 which gave special status to Jammu and Kashmir. 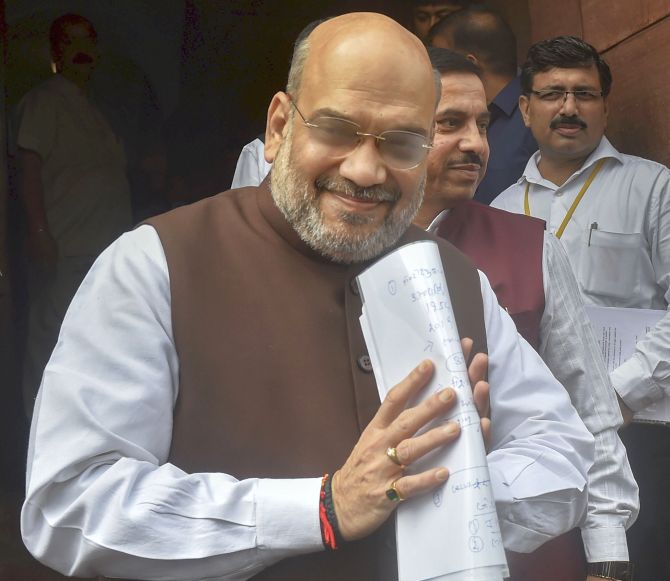 Asserting that separate status led to separatism, Arun Jaitley in a blog said that no dynamic nation can allow this situation to continue.

"A historical wrong has been undone today. Article 35A came through the back door without following the procedure under Article 368 of the Constitution of India. It had to go," he said.

"The decision of the government will help the people of Jammu and Kashmir the most. More investment, more industry, more private educational institutions, more jobs and more revenue will come," he said.

Kashmir's regional leaders now feel that they will not be able to whip up the fake issue of 'sentiment verses benefit to the people', Jaitley said.

Bharatiya Janata Party leader Ram Madhav hailed the government's decision on Article 370 in Jammu and Kashmir and said the martyrdom of its idealogue Dr Shyama Prasad Mukherjee for complete integration of the state into India has been "honoured".

The national general secretary and the party's point person in the state said that the complete integration of Jammu and Kashmir was a longstanding demand of the nation.

"What a glorious day. Finally the martyrdom of thousands starting with Dr Shyam Prasad Mukherjee for complete integration of J&K into Indian Union is being honoured and the seven decade old demand of the entire nation being realised in front of our eyes; in our lifetime. Ever imagined?" he tweeted moments after Shah made the announcement in Parliament.

BJP veteran L K Advani termed as "historic" the Union government's move to scrap Article 370 and said it is a "bold step towards strengthening national integration".

Advani, the longest serving BJP president, said the scrapping of Article 370 has been a part of the BJP's core ideology since the days of Jan Sangh.

"I congratulate Prime Minister Shri Narendra Modi and Home Minister Shri Amit Shah for this historic initiative and pray for peace, prosperity and progress in Jammu, Kashmir and Ladakh," he said in a statement.

He said he is happy with the government's decision to revoke Article 370 and believes that it is a bold step towards "strengthening national integration".

"PM @narendramodi ji ne kamaal kar diya. Desh ki ummeedon pe khare utre. Many many congrats to @narendramodi ji and @AmitShah ji on this historic decision regarding #Article370. This has opened up the path of growth and development for #JammuAndKashmir," tweeted party spokesperson Shahnawaz Hussain.