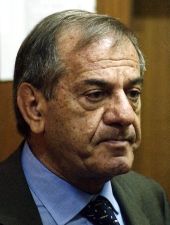 Controversial Italian businessman Ottavio Quattrocchi, who was a key figure in the Bofors payoffs scandal, has died in Milan following a stroke. Seventy-four-year-old Quattrocchi died peacefully on Friday and his funeral will take place on Monday, a member of the family told PTI on phone from the Italian city.

The Bofors charge-sheet filed in 1999 by the Central Bureau of Investigation had named Quattrocchi, who was close to the Gandhi family during his days in India as the representative of an Italian firm, as one of the accused in the case regarding the Rs 64 crore payoffs for supply of Swedish Howitzer guns to the Indian Army. The Rs 1,600 crore contract was clinched in 1986.

But on March 4, 2011, a Tis Hazari court here discharged Quattrocchi from the payoffs case after allowing the CBI to withdraw prosecution against him, bringing to an end a major chapter in the 25-year-old Bofors saga.

An application for withdrawal of the case agains Quattrocchi was filed by the public prosecutor on October 3, 2009. The CBI had unsuccessfully tried to extradite Quattrocchi to India but it lost two extradition appeals, first in Malaysia in 2002, and then in Argentina in 2007.

Quattrochi left India in 1993 to avoid being arrested. Defence minister A K Antony recently said the government does not plan to launch any fresh probe into the Bofors scandal and that Quattrocchi stands "discharged" as he could not be extradited even after 20 years of registration of the case.

Meanwhile, the Congress said Quattrocchi was a "ghost" created by the Bharatiya Janata Party and slammed the opposition for seeking to drag his name to "besmirch" the party and the Gandhi family.

Party leader Abhishek Manu Singhvi said Quattrocchi was a "ghost" created by the BJP and that charges against him had been quashed during National Democratic Alliance rule. "I don't understand why Congress should react to the death of somebody who has been a ghost created by the BJP. Somebody has died, his family deserves condolences," he told NDTV.

BJP leader Prakash Javadekar, however, dismissed Singhvi's charges saying the ghost was created because Congress was "hosting" him. "The ghost was not created by the BJP but by V P Singh and if we had created the ghost, it is because you were hosting it," he said reacting to Quattrocchi's death.