At least 19 people were drowned, including some minors, when a boat capsized on the Ganga in Bihar on Saturday, suspectedly because of overloading. 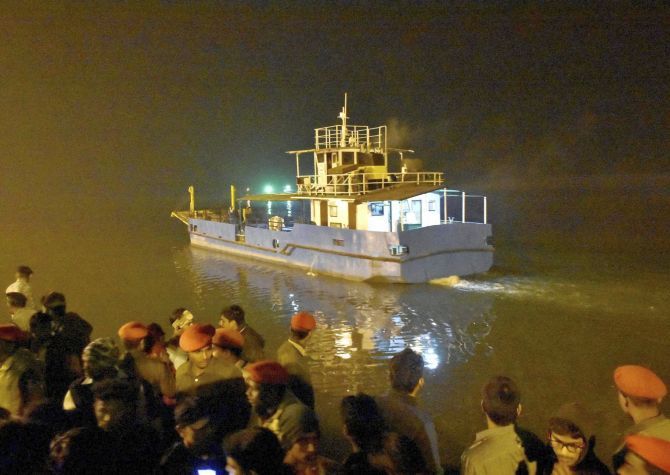 "So far 19 persons have been reported to be dead in the boat tragedy," Principal Secretary, Disaster Management department Pratyay Amrit said.

Efforts are on to look for possible survivors and bodies.

Amrit, DIG Shalin and Patna District Magistrate Sanjay Kumar Aggarwal are camping at the river bank, close to which the tragedy occurred, to supervise the rescue operation.

Around 40 people were said to be onboard the country boat when it capsized near NIT ghat in the evening.

The passengers were returning to Ranighat in Patna from Sabalpur diara across the river after watching a kite festival on occasion of 'Makar Sankranti'.

A few on the ill-fated boat swam to safety, while some families said their fellow members had gone missing after the accident.

Family members of the deceased and those missing were seen wailing at the ghat. 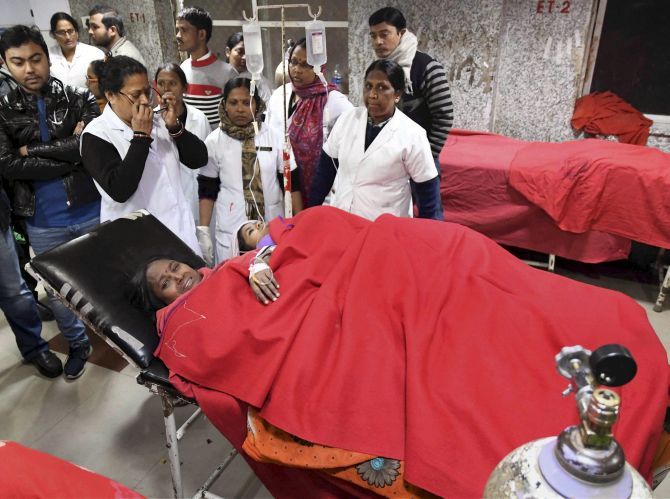 IMAGE: Injured passengers are being treated at Patna Medical College and Hospital

Chief Minister Nitish Kumar has expressed grief over the boat tragedy and ordered a probe.

Kumar has ordered cancellation of all subsequent events organised in the diara (riverine) area as part of the Makar Sankranti festival and has instructed senior officials to seek details about the programme organised from which people were returning and whether proper arrangements were made for the event, an official statement said.

The CM instructed Principal Secretary of Health R K Mahajan and the Patna District Magistrate to ensure proper treatment of the victims of the boat tragedy.

Kumar has also instructed Pratyay Amrit and DIG Shalin to supervise relief and rescue operations and has ordered Patna district administration to provide ex gratia to the family of the deceased.