Bengaluru police have arrested 60 more persons in connection with Tuesday night riots in parts of the city, official sources said on Friday. 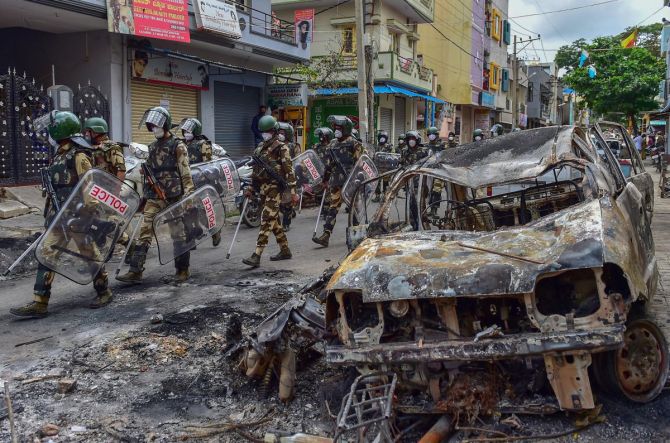 IMAGE: Security personnel carry out a flag march in the riot-hit area after a mob went on a rampage on Tuesday over a social media post, in Bengaluru, on Thursday. Photograph: Shailendra Bhojak/PTI Photo

Kaleem Pasha, husband of Bruhat Bengaluru Mahanagara Palike (BBMP) Nagavara Corporator Irshaad Begum, and is said to have instigated the rioters, they said.

The Bharatiya Janata Party took a dig at the opposition Congress following the arrest.

The role of the Social Democratic Party of India (SDPI) behind the mob violence in parts of Bengaluru, has come to light and investigation will go deep into it and their connections, Home Minister Basavaraj Bomai had said on Thursday.

Three persons were killed after police opened fire to quell a mob that went on a rampage in D J Halli and adjoining areas on Tuesday night over an inflammatory social media post allegedly put out by P Naveen, a relative of Pulakeshi Nagar MLA R Akhanda Srinivasa Murthy.

The MLA's residence and a police station at D J Halli were torched by rioters, who also set many police and private vehicles afire, and looted the belongings of the legislator and those of his sister.

Meanwhile, officials said, most of the arrested who are at Parappana Agrahara Central prisons are being sent to Ballari central jail.