Secretary of State Antony Blinken on Tuesday said that the US could not agree more with Prime Minister Narendra Modi when he told Russian President Vladimir Putin that "this is not an era of war". 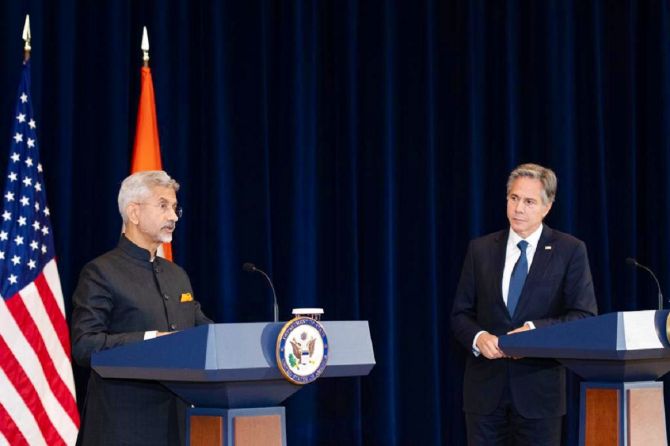 Speaking at a joint press appearance with External Affairs Minister S Jaishankar in Washington, DC, Blinken said that the US tried everything possible to avert the Ukraine conflict through diplomacy.

"Unfortunately, tragically, President Putin pursued his aggression, nonetheless. And now the Ukrainian people, but also the world are reaping the consequences," he said.

Responding to questions, he said, "I really want to emphasise on what Prime Minister Modi said because I think he captured as well as anyone I've heard, fundamentally, what this moment is about as he said, 'this is not an era of war'. We could not agree more."

In a bilateral meeting on the sidelines of the annual summit of the Shanghai Cooperation Organisation in Samarkand earlier this month, Modi underlined the importance of "democracy, dialogue and diplomacy" while calling for an early cessation of hostilities in Ukraine.

"I know today's era is not of war. We discussed this issue with you on phone several times, that democracy, diplomacy and dialogue touch the entire world," Modi said in his first in-person meeting with Putin since the Ukraine conflict began in February.

Blinken said one person has the ability to stop this aggression. And that's Putin. "If Russia stops fighting, the war ends. If Ukraine stops fighting, Ukraine ends," he added.

"I think it's very important though that voice is as consequential as India's make themselves heard. And that's why I thought that the Prime Minister's comments were so significant," he added.

On ties with India, Blinken said that the partnership between the two countries is one of most consequential in the world. "It is vital to address every global challenge that people face..." he said.

"We're bringing this close relationship between any of the United States even closer together," he said, adding that he discussed with Jaishankar about ways to further strengthen bilateral strategic partnership and advance shared objectives.

On his part, Jaishankar said at the meeting, the two sides discussed political coordination, working together in plurilateral and multilateral formats, exchanging assessments on collaborating on important regional issues and global challenges, including the Ukraine conflict and the Indo-Pacific situation.

He said that India and the US have a strong interest in encouraging more resilient and strong supply chains, and this requires policy decisions as well as practical measures involving business communities. "We are focused on this," he said.

He also expressed appreciation at the strong cooperation that India got from the US on tackling international terrorism, in particular, the listing of well-known and wanted terrorists by the US sanction process in many other formats to collaborate to keep the world safer and more secure.

"We must counter radicalisation, extremism and fundamentalism," he said.

He also appreciated the positive approach of the US to support India for a permanent seat in the reformed UN Security Council, saying the decision reflected in the position articulated by President Joe Biden himself.

"Our cooperation in different bilateral domains is progressing vigorously," he said, adding that he met Defence Secretary Llyod Austin and the commerce secretary to review the progress in the respective fields.

"On the military equipment to the best of my knowledge. I don't think in recent months we have faced any particular problems in terms of servicing and spare parts supply of equipment that we have gotten in the past from Russia," he said.

"We have a traditional multi sourcing and, for us how to get the optimal deal from a competitive situation is really what this is all about."