While praising the resiliency of Mumbaikars on the 13th anniversary of the 26/11 terror attacks, United States Secretary of State Antony Blinken has emphasised the need for a speedy trial of the perpetrators of the carnage carried out by Pakistan-based Lashkar-e-Tayiba terrorists in 2008. 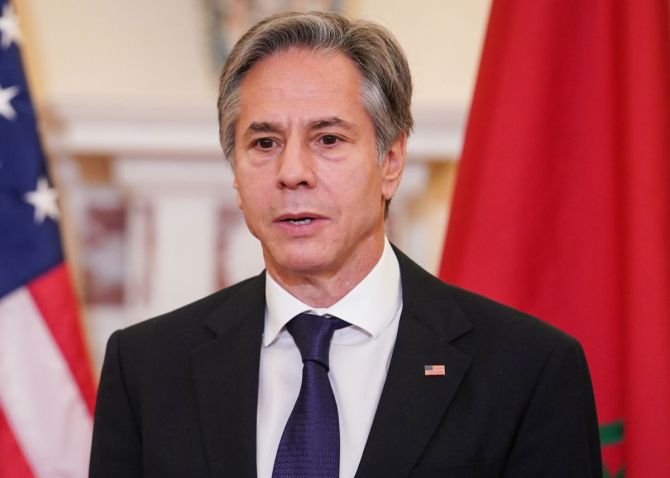 On November 26, 2008, a group of 10 LeT terrorists from Pakistan went on a rampage, carrying out coordinated attacks on a railway station, two luxury hotels and a Jewish centre in Mumbai, after they sneaked into India's financial capital using the sea route in the Arabian Sea.

As many as 166 people, including six Americans, were killed in the nearly 60-hour assault that sent shockwaves across the country and even brought India and Pakistan to the brink of war.

'Thirteen years have passed since the 26/11 terrorist attack in Mumbai. On today's anniversary, we remember the victims, including six Americans, and the resiliency of Mumbaikars. It is long overdue for the perpetrators to face justice,' Blinken said in a tweet on Friday.

The United States and India remain united in the fight against terrorism, said Deputy Secretary of State Wendy Sherman.

'On my recent trip to Mumbai, I visited the 26/11 Memorial at the Taj Mahal Palace Hotel to honor the memory of those who lost their lives in the horrific Mumbai terror attack,' she said.

'Today on the 13th anniversary of the terrorist attacks in Mumbai, we remember the lives tragically lost. This injustice cannot be forgotten,' tweeted Congressman Elise Stefanik.

Separately, the Indian embassy in Washington, DC organised a solemn event within its premises to mark the 13th anniversary of the 26/11 Mumbai attacks.

The event was marked by the lighting of candles by dignitaries.

This was followed by observing one-minute silence in memory of the victims of the 26/11 Mumbai attacks.

Remarks were made by dignitaries stressing the necessity of coordinated efforts to fight terrorism, and to bring perpetrators of the Mumbai attacks to justice.

While Larson highlighted the India-US cooperation in the field of counterterrorism, Shemtov recalled the strong India-US relationship and friendship between Jewish people and India.

He also appreciated the visit of Moshe Holtzberg (who lost his parents in the attacks) to India in 2018 at the initiative of Prime Minister Narendra Modi.

In November 2012, Ajmal Amir Kasab, the lone surviving gunman among the Pakistani group, was hanged to death in Yerawada Jail in Pune.

India has been pressing Pakistan to punish those involved in the dastardly attack but the trial of the accused in the attack has made little headway so far.

In New Delhi, India on Friday summoned a senior diplomat of the Pakistan High Commission and pressed for an expeditious trial in the case, saying the families of 166 victims from 15 countries are still awaiting closure.

In a note verbale handed over to the diplomat, the Ministry of External Affairs (MEA) also asked Pakistan to abide by its commitment to not allow territories under its control for terrorism against India.